Greenwood, SC, USA (March 2, 2019) BTN — While awaiting trial on four counts of felony DUI, now Ronald Derossett is facing a lawsuit claiming he led to the wrongful death of Greenwood biker John Ruley Jr. Ruley, then-president of the Warlocks Motorcycle Club Lakelands chapter, died alongside the chapter’s vice president Tommy Burdette on May 5 while riding their motorcycles on U.S. 221. 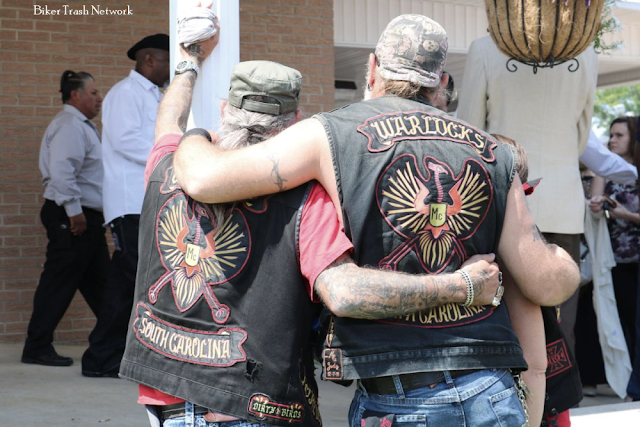 Members of the Warlocks Motorcycle Club from throughout South Carolina and other states came together to mourn the loss of Lakelands chapter President John Ruley.

They got into a wreck at 8:53 p.m. at the intersection of Highway 72/221 and Evans Pond Road when a 1999 Jeep driven by Derossett pulled out in front of them, according to the state Highway Patrol. The motorcycles struck the Jeep, sending one into a ditch to the right of the road and the other into a 2005 Nissan that was also heading north.

Their complaint, filed Monday in the Greenwood County court of common pleas, accuses Derossett of driving under the influence and failing to yield right of way the day of the wreck. The complaint also accuses Derossett’s father, Jerry Derossett, of negligence. The Jeep Derossett was driving belonged to his dad, the complaint said, and Derossett should not have been allowed to drive it, given his history of alcohol use. 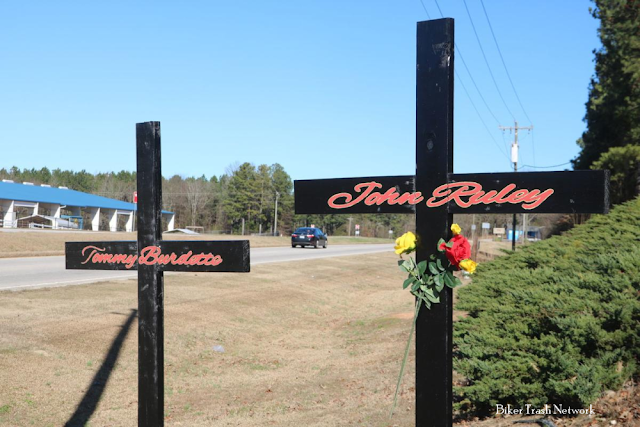 Crosses mark the intersection on U.S. 221 where John Ruley and Tommy Burdette died in a May 5, 2018 wreck.

“[Jerry Derossett] knew, or should have known, that his son had a long history of alcohol abuse and a severe drinking problem and therefor Defendant Jerry Albert Derossett, father, knew or should have known that his son Defendant Ronald Lee Derossett was addicted to intoxicants or had the habit of drinking and was likely to operate the motor vehicle while intoxicated,” the complaint said.
The complaint asks the court to award damages that would compensate the estate and Ruley’s beneficiaries, as well as punitive damages against Derossett.

In June, a judge denied Derossett’s bond, but allowed for an arrangement where he could be released from jail for medical treatment for an existing condition, and that he would be brought back once he recovered.