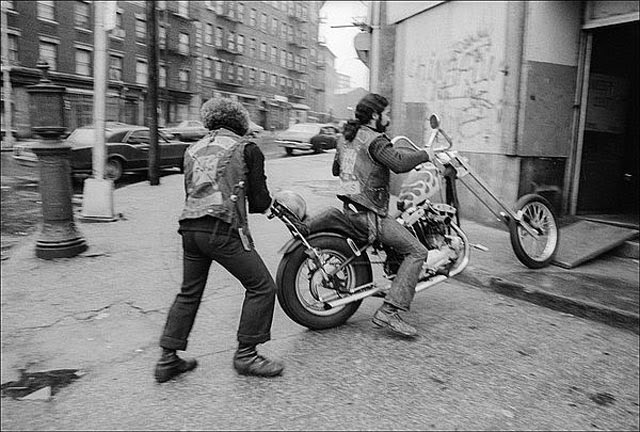 Starting out as a street gang in the early 60's and influenced by the Hells Angels the Ching A Lings eventually evolved into a motorcycle club. Kicked out of the Village in the early 1970's they made the Bronx their home. With them they took a reputation for violence, drugs and rock and roll. Though beyond this veneer lies a highly evolved subculture living what they call the Harley lifestyle reserved for one percenters. An outsider term reserved for those recognized by the Angels and other one percenter groups. This world views itself on the Amercian beliefs of individuality with a Harley Davidson motorcycle as the symbol of this freedom. Though being composed of mostly Puerto Ricans (the Hells Angels don't usually accept Blacks and Puerto Ricans as members) they differ from the Angels. Essentially they share a hedonistic view of the world and due to a shared sense of Brotherhood they surfacly appear very similar. Though a respect for self expression is tolerated and in many instances respected. In the past their various clubhouses have been the scene of many raids. The last one destroying their home but resulting in an out of court settlement in their favor. And in 1976 a 17 year old member was killed by a New Jersey State Trooper.