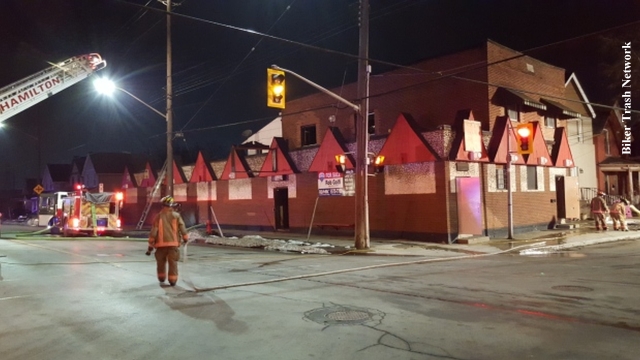 HAMILTON, ONTARIO, CANADA (March 8, 2016) No injuries are being reported following a structure fire at the former Hells Angels clubhouse in Hamilton.

Fire crews were called to the building at the corner of Beach Road and Gage Avenue North early Tuesday morning at around 3:07 a.m.

Claudio Mostacci, spokesperson for the Hamilton Fire Department, said the two-story building was venting out heavy fire and smoke when crews arrived on scene. The residence east of the building was evacuated, but the fire was contained to the 105 Beach Road address.

Mostacci said investigators are not considering the cause of the fire to be suspicious in nature.

The original call brought in six units from the fire department, but when the fire threatened a residence beside the structure, additional units were called in. Gage Avenue North was closed until just after 6 a.m.

The fire was knocked down quickly, but not before causing around $75,000 worth of damage.

Former home to the Hells Angels

The motorcycle club was evicted from their clubhouse at the end of January because the owner of the property reportedly owed three years worth of back taxes.

At the time of the eviction, a local lawyer representing members of the Hamilton chapter said the issue was not about the club paying rent. The conflict was between the landlord and the person who holds the mortgage on the property.

The clubhouse was home to about a dozen Hells Angels members and was shared by a handful of Red Devils MC members.
Email ThisBlogThis!Share to TwitterShare to FacebookShare to Pinterest
Labels: 1%er News, Canada, Clubhouse, Hells Angels MC
Newer Post Older Post Home