Waco Biker Massacre - Sorting It Out 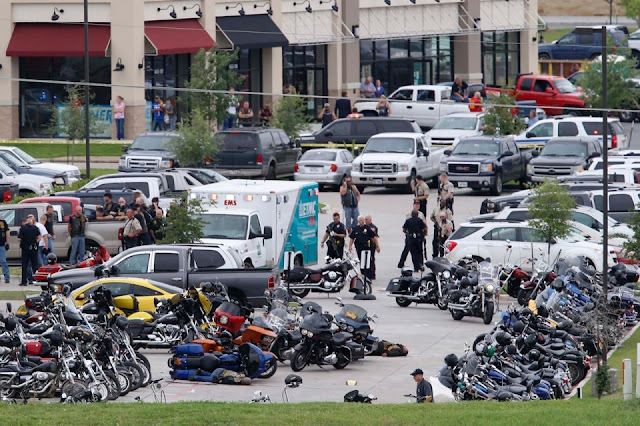 Roll Back In Time to May, 17th, 2015 at 11:00 am in Waco Texas —The Twin Peaks Restaurant in Waco, Texas has cold beer, hot wings, scantly clad waitress's and is an ideal spot for Bike Nights even though they have only been open for about a year. The Texas Confederation of Clubs and Independents had never held its bimonthly meeting at Twin Peaks before, but the organization's state chairman was returning from a national convention, and he wanted to speak to as many Texas bikers as possible about various legislative initiatives.

After nine bikers were shot dead, 20 were wounded, and 177 people from at least five different clubs wound up being arrested—the Waco Police Department would claim that the bloodbath was triggered by the Bandidos MC and the Cossacks MC arguing over the things that MCs tend to argue over: Namely Territory and Respect. Months later, the Waco Police Department was still suppressing any video footage and ballistic analysis that could offer proof of what started the whole mess. Some of the 177 arrested (including four women) sat in jail for weeks, others for months, before they could afford to post bail. All of them, even guys who hid out in the bathroom while bullets flew could face up to 99 years in jail.

Over the past two years, the Bandidos MC and the Cossacks MC have been engaged in a power struggle over Territory. In November 2013, two Cossacks were stabbed in a roadhouse parking lot in Abilene; the president of the local Bandidos chapter was arrested in connection with the assault. Earlier this year, on March 22, Cossacks allegedly forced a Bandido MC member off I-35 in Lorena and beat him that he nearly lost an eye. At a gas station in Mingus that same day, Bandidos confronted the Cossack son of a local politician and demanded that he remove the Texas bottom rocker from his cut. When he refused, they allegedly attacked him with a hammer.

The police were already there as the rest of the clubs arrived that morning. “They're circling like buzzards on a dead deer,” one said. “I look at the people I was riding with, and I said, ‘This don't look right.’ ” Afterward, said the Cossacks' John Wilson, “a Waco spokesman was touting the quick 40-second response time of the police, when that was obviously false. They were here.”

The bikers believe this provides a clue to the Waco Police Departments ongoing silence: The cops know their response was overzealous, unlawful, and now they're covering it up. Some bikers and now more of the general public believe there's an even more sinister explanation: that a firefight of some kind was supposed to happen—that it was all part of a plan by the Waco P.D. to provoke rivals into a public brawl that could be violently crushed and then used as a basis for sweeping RICO indictments.

Sergeant Patrick Swanton, the Waco Police Department's spokesman, gave several press conferences in the first three days after the shootings. He has since became a media celebrity among fellow law enforcement officers. 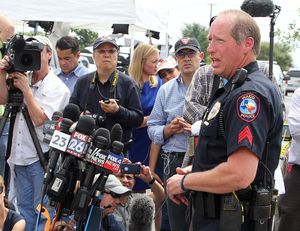 
With so little evidence available to the general public, Swanton had complete control of the news media at that point, and he took the opportunity to declare, repeatedly, that the meeting at Twin Peaks had been a criminal gathering and that every biker who attended was a gang member. When one reporter stated that many of the bikers had disputed these claims, Swanton was dismissive. “They lied,” he said. The dead men ranged in age from 27 to 65: seven Cossacks, one Bandido, and one unaffiliated biker—the 65-year-old—who was an ex-Marine recipient of the Purple Heart for service in Vietnam.

The Texas Department of Public Safety leaked a “Confidential Bulletin” to CNN about the Bandios MC  arming their chapters with grenades and C4 explosives to retaliate and named their source of information as the Black Widows MC that is feared through out the land. 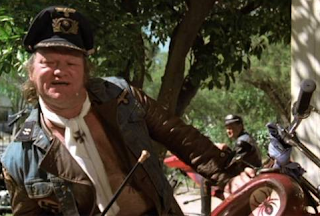 Set Up By Law Enforcement?

Trying to piece together exactly how the nine bikers died and whose guns fired the fatal shots points more and more to a setup. As reported on May 22nd 2015, Self Defacto Motorcycle Club Expert Steve Cook was in Waco a FULL Month before the massacre occurred (STORY). Several members of the various clubs have said that when the shooting started, two guys wearing Cossacks cuts stood up inside Twin Peaks, took off their cuts, and put on badges. Other witnesses have said that a Waco cop wearing a Cossacks cut was firing shots, then helped make arrests afterward.

According to Waco Police Chief Brent Stroman, only 3 of his 16 officers discharged their weapons and fired a total of only 12 rounds. But several eyewitnesses say he is fucking lying, as does the owner of the adjacent Don Carlos restaurant, who has claimed that “thousands of bullet rounds” were fired.