Vallejo, California, U.S.A (May 19, 2022) BTN  - The FBI is investigating potential “criminal enterprise activities” of the Vallejo chapter of the Hells Angels Motorcycle Club, including a beating at their clubhouse and the possession of guns, silencers, and more than 1,000 rounds of ammo seized in a series of December raids. 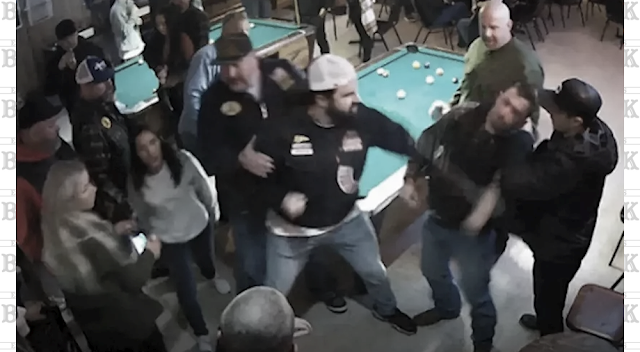 A man identified by authorities as a Hells Angels “enforcer” delivers a punch during a bar fight in Vacaville.
Photo: Eastern District of California Court Records
In a criminal complaint filed in the Eastern District of California, federal authorities revealed they’ve sought arrest warrants for three Hells Angels members and one “enforcer,” as part of an ongoing investigation into the Vallejo charter of the Hells Angels MC. The FBI appears to be weighing the possibility of seeking an indictment under the RICO Act; Task Force Officer Shane Raftery described the charter as a “criminal enterprise” that lords over other motorcycle clubs and is involved in a territory dispute with rival clubs in Yolo County.

“To perpetuate the enterprise and to maintain and extend its power, Vallejo Hells Angels Motorcycle Club members and associates engage in a pattern of racketeering predicates, including committing and conspiring to commit murder, attempted murder, intimidation, and assault resulting in great bodily injury against individuals who pose a threat to the enterprise or who jeopardize its operations,” Raftery wrote in the criminal complaint.

On Monday, a former Hells Angels prospect named Steve testified he infiltrated the group as an FBI informant, becoming one of three former prospects or members around the Bay Area to cooperate with authorities.

The complaint describes an October 2021 hours-long assault at the Vallejo clubhouse, where roughly a dozen Hells Angels allegedly beat two members of the Union Iron Workers Motorcycle Club, beating one for one hour and 50 minutes that victim said he used a clock on the wall to time the beating.