The announcement of Sonny’s death came on his official Facebook page with a post containing a farewell message written by Sonny.

“If you are reading this message, you’ll know that I’m gone. I’ve asked that this note be posted immediately after my passing,” the post says. “I’ve lived a long and good life filled with adventure. And I’ve had the privilege to be part of an amazing club.” 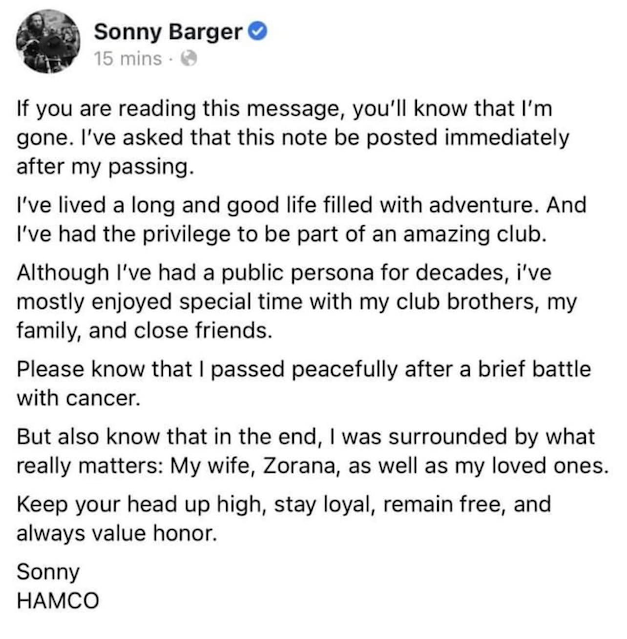 Sonny died of cancer, according to the Facebook post, which says he was surrounded by his wife, Zorana, and other loved ones.

Born Ralph Hubert Barger, the Modesto native moved to Oakland as a kid, enlisted in the U.S. Army as a teen, and gravitated toward motorcycles at a young age. In his autobiography, Sonny wrote that the Hells Angels were a small San Francisco club that almost gone before he joined. He and other bikers picked up the name and started the Oakland Hells Angels, which is now known as the club’s most significant charter.

“As a street tough, I looked the part. I wore my Levi’s jeans with one-inch-wide cuffs at the bottom, smoked Camels, had the attitude, and rode a motorcycle,” Sonny wrote in his autobiography, describing his formative years in Oakland before joining the Hells Angels.

Barger was often a target of law enforcement throughout his life, he spent lengthy period in prison. In the early 1980's, Sonny was diagnosed with throat cancer and required the removal of his vocal chords. After surviving that health scare, Sonny began to publicly advocate against smoking, tailoring his message with the Hells Angels’ textbook anti-establishment attitude: “Want to be a rebel? Don’t smoke as the rest of the world.” 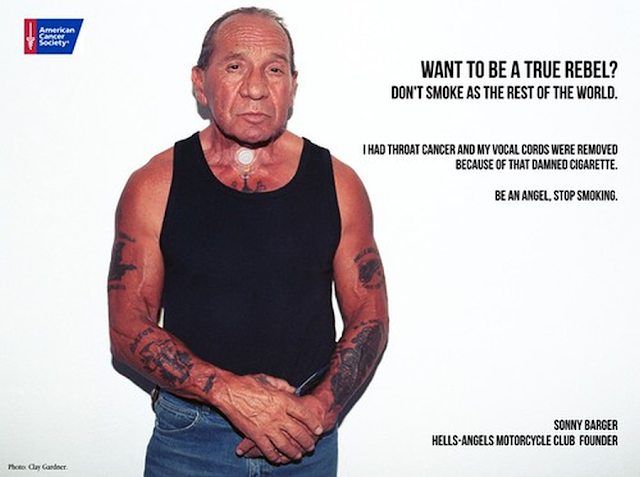 Sonny moved to Arizona in the late 90's for health reasons, but reportedly returned to Alameda County in 2016. In his final years, he largely kept a low profile, though his 81st birthday in 2019 was a major event that was hosted at the Hells Angels Oakland clubhouse.

His farewell message says he died peacefully and, despite his public persona, valued time with his family and friends the most.

“Keep your head up high, stay loyal, remain free, and always value honor,” Sonny wrote.
Our deepest condolences the Hells Angles Motorcycle Club, loved ones and family of your loss,
MLH&R  from The Biker Trash Network