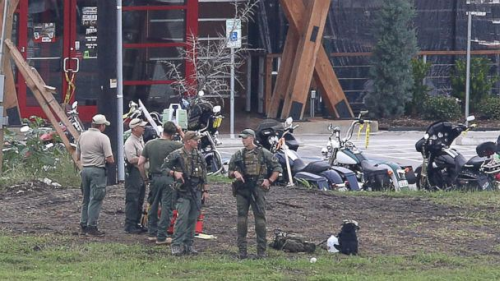 There have been several theories going around about the shooting at Twin Peaks on May 17th, 2015.  The main stream news media has relied on so called experts to evaluate what caused this and have grouped anyone riding a motorcycle as gang members (sic) to be feared. The journalist that wrote the following piece dug around and offers another explanation and we have included some excerpts with a link to the main article for review. You make your own conclusions, we have already made our ours. ~Biker Trash Network

One of the more frustrating aspects to the Waco “Twin Peaks” biker shooting story is the lack of photographic references to aid in a full understanding of the proximity of all the characters, suspects and witnesses involved.

However, after reviewing hundreds of media articles showing bits and pieces of the event we finally have some optical references for a story as it is told. But before going to that aspect another controversial point should be expressed.

No-one here is saying the police, in totality, did anything wrong.  Conversely, it would be unfair to think EVERYONE, who were rounded up as 170 ‘conspiracy suspects’ and who were detained in the aftermath, is guilty of murder.

There are many concerning aspects which need sunlight regarding the immediate police response to whatever caused the spark of violence.  Similarly, there are concerning aspects about the wholesale arrest of ‘bikers’, or unaffiliated motorcycle riders, purely due to their proximity to a violent event they did not participate in.
Hopefully, anyone vested in the interests of lawful due process (ie. everyone) would be concerned with ‘wholesale roundups’.