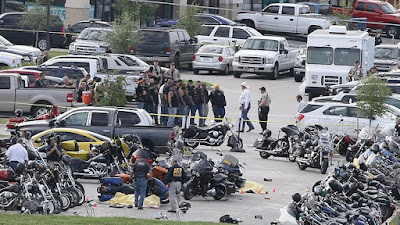 Massacre at Twin Peaks on May 17th, 2015
Our fellow bikers are locked up in Waco, Texas on false charges & we wonder where the hell are the Attorneys & Rights groups that eagerly took money for "Protecting Our Rights" are doing about getting them out..ABATE, NCOM the MRF & the rest of the so-called motorcycle organizations are silent..They need to put up or shut the hell up..Are you pissed yet?..we surely are..~Biker Trash Network..

The Main Stream News Media are starting to wise up..
When her husband was arrested after a shootout at a biker club gathering at a Twin Peaks restaurant here May 17, Sheree Clendennen figured security camera video would soon clear him. “At first I just thought they’re going to take all these guys, look at the video, see who’s innocent and let all these guys go,” said Clendennen, 29, of nearby Hewitt. “Then Week 2 it was like, ‘Oh my gosh -- they’re not letting people go. They don’t care what’s on the video’,” she said of police, “With all of the security cameras and all of them out in the parking lot watching what went on, there is no reason all of these guys should have been held so long.”

But 17 days later, of the 177 people arrested in connection with the shooting that killed nine and wounded more than a dozen, 143 remain jailed this week, many on $1-million bond. Some face at least a month long wait for a bond-reduction hearing, and attorneys say it’s unlikely their clients will post bail. They have been arraigned but have not been formally charged. Prosecutors have 90 days to present a case to indict to a grand jury before those in custody are entitled to reduced bonds.

The bikers were arrested on allegations of engaging in organized crime, but none have been specifically charged in the shootings and the investigation is ongoing this week, according to Waco Police Sgt. W. Patrick Swanton. Several police officers who fired their weapons at the scene have been placed on administrative leave pending a separate, ongoing investigation, Swanton said.

The delays in prosecuting those at the scene of the shooting in this conservative central Texas college town have triggered legal complaints and controversy, including a Thursday hearing about whether two state district judges should recuse themselves in the matter.

“It’s unprecedented, this wholesale roundup of people,” said F. Clinton Broden, a Dallas attorney representing Matthew Clendennen. “It seems like something out of ‘Casablanca’ -- just round everybody up. You’re arresting people for being at the scene of a crime. It’s scary that this can happen in America.”
Amy Kuzniarek, a spokeswoman for the McLennan County district attorney’s office, said this week that “this is an open, active criminal case and an ongoing investigation, therefore, our office cannot and will not comment.”

Clendennen, does not have a criminal record, is a landscaper, father of four, former firefighter and member of the Scimitars motorcycle club. He recently filed a complaint with the State Commission on Judicial Conduct against the justice of the peace who arraigned him, and a federal civil rights lawsuit against the city of Waco, McLennan County and prosecutors, alleging that he was wrongfully arrested and detained.

“He spent 17 days in jail, he’s likely to lose his business, he’s sole provider to his current family, a wife and two children, and he shares custody with his ex-wife, who is going back into court to get custody,” Broden said, adding that Clendennen’s motorcycle was seized by police.n his complaints, Clendennen claims that McLennan County Justice of the Peace Walter “Pete” Peterson said that he gave bikers a $1-million bond “to send a message,” and that Dist. Atty. Abelino Reyna created “fill-in-the-blank” arrest warrants without probable cause, alleging that the bikers were not cooperating and were therefore not victims.
Peterson and Reyna made similar comments to The Times in the wake of the shooting. Petersen declined comment this week. Broden said his client did cooperate, but that even if he didn’t, “That’s his 5th Amendment right, he got Mirandized.”

As for Clendennen's arrest, Broden said that “there’s got to be individual probable cause. They’ve got the tapes of the scene, there’s no reason they can’t be reviewed to make determinations. You just can’t keep bystanders locked up because you don’t know who did the shooting.” He noted that some bond-reduction hearings have not been scheduled until late July. “My guess is the [U.S.] Department of Justice is going to have to come in at some point. It does not seem the local people are competent to handle this in a constitutional matter,” Broden said.

Spokesmen for the Justice Department referred questions to local officials this week.
At least 47 of those arrested qualified as indigent based on their income and assets and have had attorneys appointed to represent them, according to the local indigent defense coordinator, Cathy Edwards.
Edwards said she planned to visit an additional dozen at the county jail Thursday to double-check whether they qualify as indigent. Edwards said that attorneys for the indigent are typically appointed from a list the county maintains, but that only 15 of the attorneys are local so she has had to draw from surrounding counties..

The group includes Alan Bennett, who represents a grocery store manager and father of four from Midlothian, Texas, who remained jailed Thursday, too poor to post $1-million bail.
“My client has lost his job, he’s separated from his wife and kids and there’s no immediate relief in sight for him,” Bennett said, “I tried to negotiate with the district attorney, who informed me he was willing to reduce his bond to $250,000, which is really no different than a million dollars for many of us.

If you’re indigent, which my client is, it’s pretty hard to imagine how you will conjure up $25,000 to pay a bondsman.” Bennett said his client is a member of the Cossacks motorcycle club, whose feud with the Bandidos club allegedly sparked the shooting, and that all members were offered the same bond reduction.
“It’s improper. It’s a matter of guilt by association and they don’t have any evidence to justify the bond or holding them for so long,” he said.

District Judge Ralph Strother defended local officials’ handling of the cases, saying they could handle the workload and had no plans to bring in additional judges.
“Many of these people are working through the process, the district attorney’s office and their lawyers are negotiating the conditions of their release,” he said, adding, “I have no idea how many of them will end up being prosecuted. If that happens, we will have to determine whether we need any extra help. That’s a possibility.” He said forcing those jailed to wait until next month for bond-reduction hearings was not unreasonable.

“That’s why many of them are negotiating with the DA’s office and many of them have been released,” Strother said, “We’re dealing with it. That’s just part of the process and part of the system. I liken this to the recent floods that we’ve had: When you have that much water in one place at one time, it takes a while for things to return to normal.”
Clendennen’s attorney negotiated to have his bond reduced to $100,000, and his family chipped in to bail him out Tuesday, paying $10,000 to a bondsman.

“When it comes out that Matt is completely innocent, that $10,000 that his grandfather put up we will not see again,” Sheree Clendennen said.

She said her husband immediately returned to work before he loses any more landscaping customers. His next court date is set for Aug. 6.