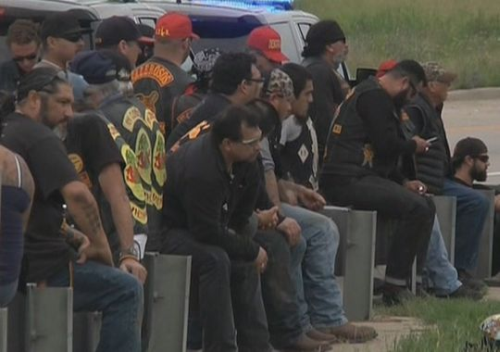 We have a safe bet and we have a reason to believe a lot of paper work at the Waco Sheriff's Office and at the The District Attorneys Office along with emails and other documents e-mail’s are being deleted as we post this. ~Biker Trash Network

A Houston attorney’s media release alleging jailed bikers were being forced to waive their rights to sue the city and county is false, but the controversy it created has that lawyer squaring off with a Waco attorney over the rumors.
Houston attorney Paul C. Looney and Waco attorney Brittany Lannen claim each other is responsible for rumors spreading like wildfire among the jailed bikers, their families and friends and on social media that the bikers were being told they needed to waive their rights to sue the city of Waco or McLennan County in exchange for bond reductions.

Looney’s Sunday media release accused McLennan County officials, including those in the “public defenders office,” of this “scurrilous activity.” McLennan County has no public defenders office. “I’ve never seen anything like the lawlessness that the authorities have perpetrated on these people, and now to add insult to injury, they are trying to cover their own tracks in exchange for bond,” Looney claimed in his Sunday statement.

But State District Judges Matt Johnson and Ralph Strother, who have approved bond reductions recently for at least 25 of the bikers, say Looney’s assertion is not true. Also, attorneys who have negotiated bond reductions with the district attorney’s office said there was no such provision in the agreements they reached to secure their clients’ releases.

As the judges and fellow attorneys discounted Looney’s statements, he issued another press release Monday, pointing his finger at local attorney Lannen as the source of the waiver rumors. In that second statement, Looney talked of how cooperative and “quite helpful” the judges and DA’s office were in helping secure reduced bonds for his two clients.

“It has been determined the district attorney’s office was not involved in yesterday’s attempt to get defendants to waive their rights of litigation in exchange for bonds,” Looney said. “That entire debacle was orchestrated by McLennan County private attorney Brittany Lannen. Her behavior in this matter is bizarre, unprofessional, unethical and unappreciated by all of the attorneys representing defendants, by the McLennan County District Attorney’s Office and by the McLennan County court staff.”

Looney told the Tribune-Herald he first heard of the supposed waivers after Lannen called him “and tried to get me to go along with her scheme.” “My client had already been approached by other people inside the jail about this waiver,” Looney said. “She said attorneys could get the bikers out quickly, the DA’s office supports the idea — which they didn’t, by the way — and that everyone should say that they were treated fairly.”

Lannen denies the accusations and said she first heard of the waivers from Looney’s media release on Sunday. She called his claims “reprehensible.”
She provided a statement from her Valley Mills firm, DLW Law, which said: “This mythical waiver was brought to our attention by a post from Mr. Looney. No client of DLW Law has signed such a waiver and no such waiver will ever be presented by DLW Law. We are unaware of any other defendants who have signed such a waiver. No one from this office has seen this waiver and has no knowledge as to who drafted it and whether it even exists.”

Looney promised to report Lannen’s behavior to the State Bar of Texas. Susan Criss, a former state district judge from Galveston who represents three of the jailed bikers, said she also plans to file a bar grievance against Lannen for reportedly suggesting the bikers sign a waiver of litigation. “That is just way out of line,” Criss said.