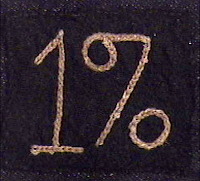 How it all started

"By wearing the one percenter patch, they're acknowledging they have a criminal connection

- Police Inspector Budd
WRONG
The 1% tag relates to an indecent that happened in America in 1947. There were some hi-jinks at a motorcycle rally in Hollister. It was pretty mild; a few people got drunk and rowdy. The media afterward staged photos to publish with sensationalized story. In response, the American Motorcycle Association (AMA) issued a statement that said 99% of motorcyclist were good upstanding citizens and the others, the troublemakers, would be barred from membership in the association.

Some motorcyclist jokingly stated that they were in the other 1% and went off to start their own clubs. Therefore, the 1% symbol means only that they identify themselves as the rowdy bikers who the AMA outlawed from AMA membership. There is no connection between the 1% tag and organized crime. Some clubs wear the AMA patch upside down in protest of being forced by the 1%er's 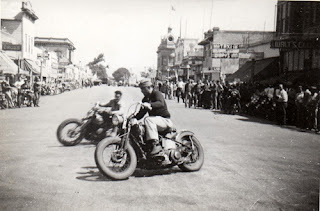 In order to designate themselves as an outlaw club to all other clubs, the one percenters cut their club patches into three separate pieces. The top rocker was the name of the club, the center was the emblem of the club, and the bottom rocker was the local from which they came.  These outlaw motorcycle clubs put on their own events and parties and did the opposite of what the AMA had been doing. There were no Best Dressed awards, they “chopped” down their bikes to go faster and look different, rode with no mufflers, they would drink, and do other “wild” things. Such is history.