Providence, Rhode Island, USA (March 2, 2020) BTN —As his legal troubles mount, the president of the Hells Angels Rhode Island chapter is accusing the authorities of trying to entrap him and going easy on a “star witness” with a violent history.

Joseph Lancia, 28, of Smithfield, pleaded not guilty in District Court on Monday morning to two misdemeanors stemming from an altercation at the Cadillac Lounge strip club Saturday night. Police said they saw him punch a man, later identified as a strip club bouncer, in the face. 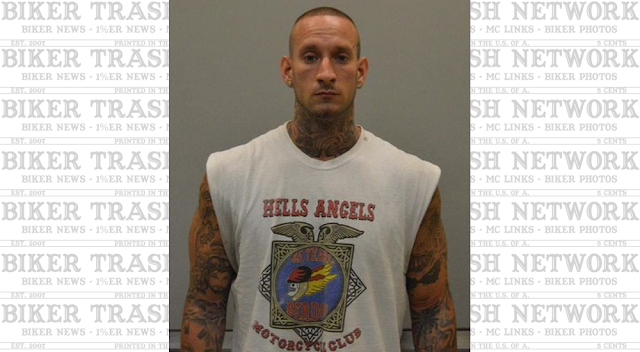 He will remain locked up because authorities say he violated the conditions of his bail in a case from June, when police said he shot at a man — a former prospect for the motorcycle club — driving by the Hells Angels Providence clubhouse in a truck.

In legal papers filed just days before the strip-club altercation, Lancia’s attorneys launched a number of accusations at the man police said he tried to shoot.

The man, Richard Starnino, actually pointed a gun at Lancia first, and has threatened Lancia’s life a number of times, the filing says. Nobody was injured in the incident.

“The Grand Jury was never made aware of Richard Starnino’s drug habits, nor were they made aware of his violent criminal history or the numerous death threats he made against Joseph Lancia,” the filing says. “Furthermore, it was never disclosed to the Grand Jury that Starnino was an informant for the State Police, and that Starnino instigated and caused this incident.”

And Starnino has seen his own legal troubles quickly resolve in his favor — because he was cooperating with prosecutors in a long-running investigation into the Hells Angels, Lancia’s lawyer, Joseph Voccola, said.

Voccola said in a court filing that Starnino was arrested in May after beating a woman who’d gotten sand into his vehicle.

But by then, Starnino, 47, was already cooperating with the state police in an investigation into the Hells Angels, and had been for a number of months. So despite the fact that the victim reported suffering broken bones and needing 30 stitches, Starnino was charged only with misdemeanor simple domestic assault, the filing says.

Just days later, Starnino was charged again with violating a no-contact order after another assault, Lancia’s attorneys said. But he again was only charged with a minor offense, and authorities withdrew an accusation that he’d violated his bail on the earlier charge, Voccola said.

The charges against Starnino were eventually dismissed, according to court records.

Lancia now faces an accusation that he violated the terms of his bail in the June case after his arrest at the strip club over the weekend. That differs from the treatment Starnino received, Voccola said. “Everybody should be treated the same,” Voccola said. “That’s not the case here.”

Starnino’s attorney in his latest cases from 2019 did not immediately respond to a request for comment.

Lancia will pursue a self-defense argument and an entrapment defense; the route Starnino took with his truck to drive by the Messer Street clubhouse “doesn’t make sense,” Voccola said.

Maj. Timothy Sanzi of the Rhode Island State Police said he could not comment on the specifics of Lancia’s arguments, but said: “The detectives do a terrific job and we stand by the investigations they produce.”

Lancia is expected to appear in Superior Court on Tuesday to face accusations that he violated the terms of his bail from his arrest at the strip club over the weekend. He rejected a deal that would have resolved the bail violation and the underlying misdemeanors from the weekend but would have resulted in him serving 75 days at the Adult Correctional Institutions.

Voccola noted that the victim in the strip club case “doesn’t even want to come forward.”

But police said they saw him punch the victim, so he was charged with disorderly conduct, a misdemeanor. On Monday, a simple assault charge was added to the case.