Brockton, Massachusetts, USA (June 15, 2020) BTN - A 58-year-old Whitman man who police say belongs to the Outlaws motorcycle club was arrested by state troopers for carrying an illegal gun after a high-speed chase through Brockton, according to police.

Troopers assigned to the Massachusetts State Police Troop D Community Action Team saw two motorcycles “traveling much faster than the posted speed limit of 40 miles per hour” on West Chestnut Street in the city of Brockton on Friday. 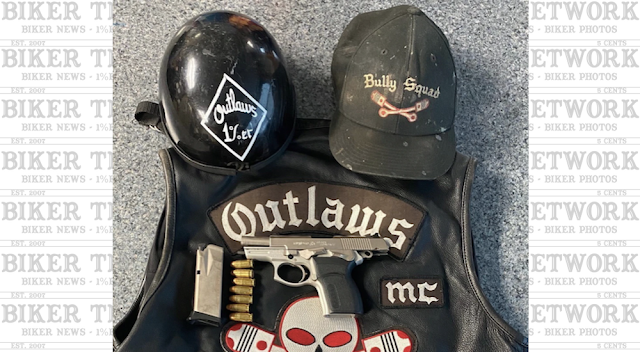 “Their estimated speed was near 70 miles per hour,” said Massachusetts State Police, in a statement about the arrest that was released on Sunday morning. “As troopers activated their emergency lights in an attempt to stop the motorcycles one of them fled at a high rate of speed toward West Bridgewater.”

State police said they caught up with the motorcyclist, identified as Kenneth McDonald, 58, of Whitman, on Manley Street in West Bridgewater. State police said he is a “suspected member of the Outlaws motorcycle club,” which has been previously designated by the U.S. Federal Bureau of Investigation as an outlaw motorcycle gang.

McDonald was armed with an unlicensed handgun, state police said. Troopers seized his BERSA SA .45 firearm, which was “fully loaded” with seven rounds, including one in the chamber, according to state police, which provided a picture of the handgun, along with an Outlaws leather vest and a black Outlaws “1%er” helmet.

“McDonald does not legally possess a license to carry a firearm in Massachusetts,” state police said.

McDonald was released over the weekend on $500 bail and is expected to be arraigned Monday in Brockton District Court.