Nanaimo, BC, Canada (June 15, 2020) BTN — British Columbia’s Supreme Court has curtailed the sweeping powers of the provincial Civil Forfeiture Office in a ruling that concluded it could not seize three Hells Angels clubhouses based on a belief that they would be used for future criminal activity.

In a 321-page decision released late last week, Justice Barry Davies struck down a core provision of the provincial Civil Forfeiture Act as unconstitutional, ruling the office’s targeting of property because it is likely to be used to commit crimes in the future intrudes into criminal law – “the exclusive jurisdiction of the federal legislature." 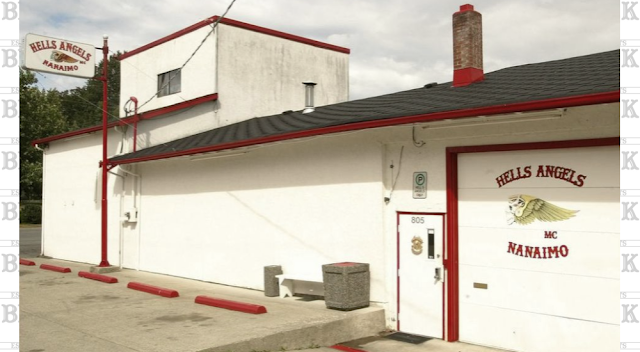 The Hells Angels clubhouse in Nanaimo was seized in 2007

To illustrate his reasoning, Justice Davies posited that, under B.C.'s civil-forfeiture law, dangerous drivers who had served their sentence for killing or severely injuring a pedestrian could have their new car seized as “a future instrument of unlawful activity.” The law’s speculation over potential new crimes also runs counter to the “principles of sentencing enacted by the Parliament of Canada under the Code that have as an objective the rehabilitation of offenders,” he wrote.

Rick Ciarniello, a long-time Hells Angel who acts as a spokesperson for the bikers and who testified in the trial, said Hells Angels living in Manitoba and all parts farther west were asked for monthly donations to fund the 13-year legal fight, which cost more than a million dollars.

“We were probably the wrong people to fight this, but the only ones that had the resources and wherewithal to do it,” Mr. Ciarnello told The Globe and Mail on Sunday. “These were not just the rights of Hells Angels that were being violated; what we did here is we fought for the rights of all British Columbians."


The judge found the office was only able to prove that the B.C. Hells Angels, an organization with a reputation for violence and multiple members convicted of serious crimes, used their Vancouver clubhouse for a trio of cocaine and methamphetamine deals at least 15 years ago. Justice Davies said it is possible the bikers or their associates could once again use this clubhouse and the two others for such crimes, but the provincial agency did not prove that this is likely.

The office launched its case involving the Nanaimo clubhouse in late 2007. It began proceedings against the Vancouver and Kelowna clubhouses in 2012.

Hope Latham, a spokesperson for B.C.’s Solicitor-General and Minister of Public Safety, whose office oversees the civil-forfeiture system, said it was too early to say whether the ruling would be appealed to the province’s highest court. “For now, the Civil Forfeiture Office and its counsel will take time to review the court’s findings,” she said in an e-mailed statement.

Joseph Arvay, lead lawyer for the Hells Angels in the case, said not only was the law unconstitutional, but the office’s interpretation of the legislation was an overreach. As well, he added, the office had “all the resources imaginable” to prove the clubhouses were instruments of crime and failed to do so.

“Say what you will about the Hells Angels but I think they made an important stand,” Mr. Arvay said. “Almost everybody settles these cases because the risks of going to trial are so great.”

In a 2016 report, the Canadian Constitution Foundation, Calgary-based civil-liberties advocates, looked at eight provincial civil-forfeiture programs across the country and found they often trampled on the rights of citizens and seized property from innocent people. It gave the civil-forfeiture systems in B.C. and Ontario an "F" grade.

Lawyer Bibhas Vaze, who is representing a client in another trial arguing the civil-forfeiture system is unconstitutional, said the ruling is another clear rebuke to the office’s practices. He said in recent years clients have had to sign consent orders to keep their property but allow the office to seize it in the future if the office conducts a spot inspection that uncovers alleged criminal activity.

“The director is engaging in future policing, that’s unconstitutional,” Mr. Vaze said. “There’s a lot of people who think that fairness in the law only applies to certain sets of people, but we’re seeing across North America right now that people are finally cluing in that when you don’t take fairness seriously it results in rampant inequality in our world.”