Spokane, WA (April 5, 2018) BTN — A member of an Oregon motorcycle club is facing accusations in Spokane of rape, kidnapping and showing a woman videos appearing to depict murder.

Roger L. Heuberger, 40, was arrested Sunday after a woman said she was sexually assaulted, injected with drugs and cut while tied to a chair inside a hotel room off Division Street. At his first court appearance Monday, prosecutors charged Heuberger with third-degree rape, unlawful imprisonment and possession of meth and heroin. A judge set bond at $25,000. 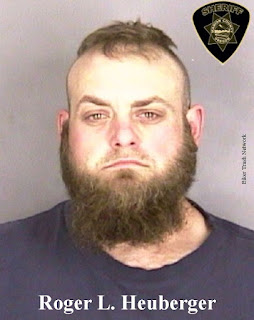 The woman told police that on March 28 or 29, she and another friend went with Heuberger and a fellow member of the biker club Free Souls – which is based out of Oregon – to Liberty Motel, 6801 N. Division St., where the four “partied,” according to court records.

The next day, she said Heuberger got upset because his girlfriend went with the biker friend to Coeur d’Alene. Court documents say Heuberger and the alleged victim went back to the hotel, where she said she was told to take off her clothes because Heuberger thought she was wearing a wire.

While she was under the influence of the drugs, she told authorities that Heuberger brought out a laptop and played a DVD that appeared to show the “killing of women and children.” The woman said it showed a male “who looked similar to Roger” taking victims “into the woods and then murdering them.”

Court records say Heuberger then started cutting the woman on the arm. After allowing her to get up from the chair, he proceeded to rape her.

After several hours of captivity, the woman was able to convince Heuberger to let her leave the motel room to get food, court records say. The two went to Taco Bell across the street, where she locked herself in the bathroom and refused to leave.

Two days later, she contacted police while staying at MultiCare Deaconess Hospital, where officers interviewed her and found wounds consistent with being choked, cut and sexually assaulted.

On Sunday, police served a search warrant on the motel room, where they found several plastic baggies floating in the bathroom’s toilet. They found other white bags in a box, a black pistol, syringes and a computer with a DVD that could contain the footage described by the victim, according to the warrant.

Heuberger’s friend and fellow club member from Vancouver, Washington, was interviewed by police, and said he was gone at the time of the alleged crimes. He has not been arrested. His car was seized for evidence.

Heuberger has no criminal history in Spokane County. According to a search of Marion County, Oregon, jail records, the 40-year-old was arrested and charged with assault and harassment in June 2017.