Nova Scotia, Canada (November 20, 2020) - Police in Cape Breton say at least two motorcycle clubs are recruiting on the island and their memberships are increasing. Police say they have reason to suspect a new clubhouse is also being established in the Coxheath area. 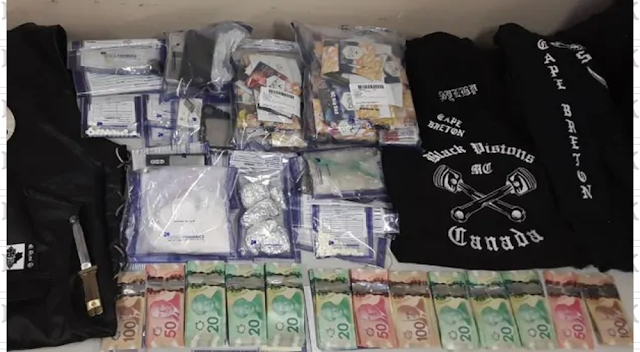 Motorcycle clubs first started cropping up on the island in 2015 and Constable John Campbell of the Cape Breton Regional Police Service said growing activity is tied to a flourishing drug trade.

"Right now we have four motorcycle gangs: the Outlaws, the Black Pistons, the Highlanders and the Salty Souls," Campbell said. "There's a huge market here for cocaine right now and they'll take any opportunity they can to make money for their club, for their organization, and it's strength in numbers."

Campbell said clubhouse members often portray themselves as good neighbors and motorcycle enthusiasts. "They do fundraising for different events or for special causes," he said. "They want that to stick out in people's minds so that when the police do enforce them, then the community is wondering, 'Why are the police bothering these decent people?'"

Cook said crime groups are intrinsically linked to violence. He warned against buying, or even wearing, clothing that supports criminality. "They put money into their coffers that they can use for other things," he said. "And it spreads their message into the community."

Police will also be approaching the Cape Breton Regional Municipality in hopes of creating a bylaw to ban such emblems on municipal properties. “By being proactive and partnering with our community, we can better prevent these organizations from establishing themselves here,” Walsh said.

Business owners concerned about criminal activity were told by Walsh that there is “safety in numbers.” Cops warn members of the public not to confront or engage with someone suspect of motorcycle club activity.
SOURCE: CBC
Email ThisBlogThis!Share to TwitterShare to FacebookShare to Pinterest
Labels: Biker News, Black Pistons MC, Canada
Newer Post Older Post Home