Surrey, BC, Canada (November 22, 2020) - Surrey RCMP executed a search warrant overnight Friday at the Hells Angels Hardside clubhouse in connection with a gun investigation. Mounties continued with the search Saturday at the rented rancher in the 18000-block of 96 Avenue.

The search is connected to the arrest Friday morning of Gurpreet Dhaliwal, a prospect with the Hardside chapter and an associate named Meninder Dhaliwal, who is linked to the Brother Keepers club. Gurpreet Dhaliwal was a passenger in an SUV allegedly driven by Meninder when it collided with a sedan Friday just after 8:00 a.m. near 180th and Golden Ears Way. 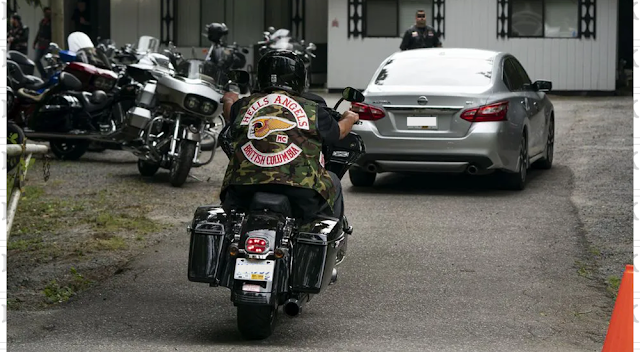 Surrey RCMP said in a news release Friday that “the driver of the SUV fled the scene on foot while the passenger, who had minor injuries, remained at the scene.”

“As the investigation unfolded, the officer observed a handgun inside the SUV and subsequently arrested the passenger for possession of a weapon for a dangerous purpose. The driver of the sedan remained at the scene and had minor injuries,” Cpl. Joanne Sidhu said. “At approximately 10 a.m., the driver of the SUV was located and apprehended with the assistance of the Integrated Lower Mainland Police Dog Services.”

Sidhu said the driver was arrested for failing to remain at the scene of a collision, dangerous operation of a motor vehicle and possession of a weapon for a dangerous purpose. She did not release the identities of either suspect. “Both the driver and the passenger of the SUV are known to police and are believed to have ties to organized crime,” Sidhu said.

Sidhu also said Friday that “the investigation is ongoing as officers work to determine the circumstances that led to the collision.”  Neither Dhaliwal has yet been charged in the current investigation into the firearm.

Retired Vancouver police biker specialist Brad Stephen said Saturday that “it’s not common for a Hells Angel member or prospect in B.C. to carry a firearm.” Speaking generally, Stephen said they would only do so “if they feel for some reason they need to defence themselves personally or there is a threat against the club.”

And he said in several previous cases of members or prospects who’ve been caught with firearms, they not only faced charges, but also repercussions from their biker brethren. “They’re held accountable and they have to explain themselves to the club,” said Stephen, who spent 20 years investigating motorcycle clubs.