Arrest Made After Outlaws Clubhouse Raid

Anderson, Indiana, USA (May 7, 2021) - A man accused of a stabbing turned himself into authorities overnight, according to Madison County Sheriff Scott Mellinger. Christopher Smith, is charged with a Level 2 felony robbery resulting in serious bodily injury and Level 3 felony aggravated battery. A warrant was issued for Smith’s arrest on April 15.

According to authorities, Smith and Matthew Pope, 46, also of Anderson, are accused of stabbing Steven Henderson around 1:30 a.m. on April 1 at Woody’s Bar in Lapel. Pope has been in custody on the same charges as Smith since April 27. He is being held on a $35,000 full cash bond. 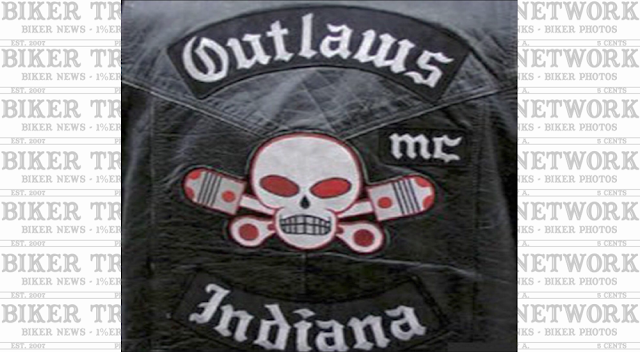 Witnesses told investigators that Smith and Pope followed Henderson into the bar’s restroom, according to an affidavit of probable cause by Brad Oster of the Madison County Sheriff’s Department. Henderson was wearing an Outlaws Motorcycle club vest with Chicago markings the night he was stabbed, according to Oster.

Henderson’s artery was cut and he required seven liters of blood and is undergoing extensive medical treatments for his injuries, according to Oster. Henderson told investigators the stabbing was because of “Outlaw business between the Chicago, Fort Wayne and Anderson chapters,” according to the affidavit.

He told investigators the men were trying to get information out of him about the Chicago clubhouse, but declined to elaborate. Henderson said he had a knife on his belt when he went into the restroom, but it was stolen that night and he believes it might be the knife that was used to stab him.
Email ThisBlogThis!Share to TwitterShare to FacebookShare to Pinterest
Labels: Arrest, Clubhouse, Motorcycle Club, Outlaws MC
Newer Post Older Post Home