Toronto, Ontario, (May 2, 2021) - Five people from Kingston and Whitby, including an Outlaws Motorcycle Club probationary member have been charged by police following a multi-jurisdictional investigation that yielded roughly $400,000 worth of drugs.

The street crime unit and drug enforcement unit narrowed their focus to the actions of a probationary member of the Kingston chapter of the Outlaws Motorcycle Club. Once the investigation focused on him, the Provincial Biker Enforcement Unit became involved, OPP Staff Sgt. Scott Wade said. He noted that Kingston Police are a major partner in the Biker Enforcement Unit.
“While this investigation does not involve criminal organization charges, it certainly highlights the criminal activity that outlaw motorcycle gangs are involved in,” Wade said.

Police claim he and his associates were selling drugs in the Kingston area. Later in the investigation, police learned residents of Whitby were also involved, Cunningham said. “They were higher-end drug dealers, and that cell has been disrupted,” Cunningham said. “I would say it will make a serious impact on the cocaine and fentanyl trafficking in Kingston.” 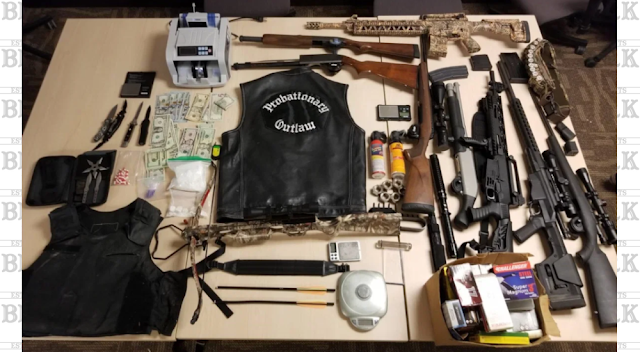 Bringing in assistance from the Provincial Asset Forfeiture Unit and Durham Regional Police, investigators decided to search four residences on April 24. Two were in central Kingston, one was the Outlaws clubhouse in Wilton, and the fourth was in Whitby.

The Outlaws MC said in a statement to the Whig-Standard on Sunday that no one was at the clubhouse at the time of the search and it was later turned back over to its members. Two men were arrested at the Kingston residences while they were being searched, and he was arrested later, Cunningham said.

Police have charged him, who resides in Kingston, with possession of cocaine for the purpose of trafficking, possession of hydromorphone for the purpose of trafficking, possession of dangerous weapons, carrying a concealed weapon, possession of a prohibited weapon, and possession of proceeds of crime under $5,000. Cunningham said police are still investigating further firearms offences. None of the charges have been proven in court.
The Outlaws MC association said in an email to the Whig-Standard that it is shocked by the news release sent by Kingston Police. It also clarified that a “probate” is not an official member of the association. The statement says that no weapons, drugs, vehicles or large amount of cash were seized from the clubhouse.

The association said it would not support those charged through the court process and stood by the statement on its website that says it is not a criminal organization. The Probationary Outlaw MC vest was likely seized because it was relevant to the charges, Wade said. “The vest and the colours are important to outlaw motorcycle gangs because it’s how they project or show their power,” Wade said.
SOURCE: Ottawa Citizen