Law enforcement were looking for a suspect and any evidence in a near fatal stabbing from middle April. “A warrant was executed, a warrant was obtained, and with two or three SWAT teams that warrant was executed last night at the Outlaws clubhouse. We took some evidence. What the value of that evidence is right now we really don’t know for sure. There may be some value there.” Madison County Prosecutor Rodney Cummings said. 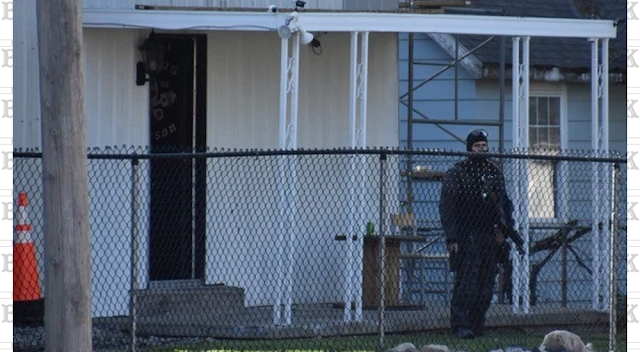 Cummings said investigators were searching for evidence regarding the assault of a Chicago man in the restroom of Woody’s Tavern in Lapel last month. “He came here, stopped in a bar, had Outlaws motorcycle club gear and patches, and there happened to be two real Outlaws MC members in the bar,” said Cummings. “They weren’t too happy to find he was a guy wearing the stuff but really wasn’t part of their club, got into a conflict, he got stabbed several times.”

Police have already arrested Matthew Pope, 46, and are still seeking Chris Smith, 34. “They concluded he was not a real Outlaw and the conflict took off and after they stabbed him, they took his colors and his jacket and left,” said Cummings. “He didn’t have those anymore.”

Cummings said the Outlaws have traditionally kept a low profile in Madison County and as a result have not been the target of any extensive criminal investigations. “There’s been Outlaws here for decades,” he said, “but off-and-on, sometimes they come, sometimes they go, it appears they’re coming back, making an appearance here.”