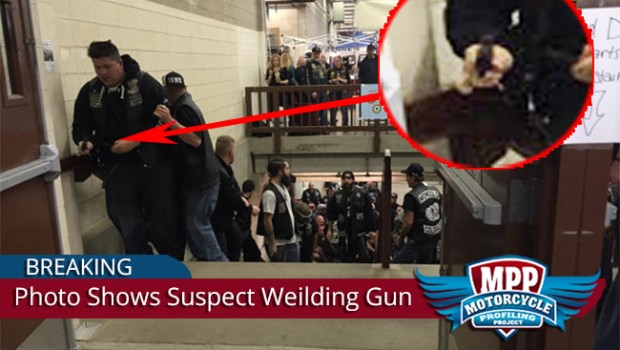 Press Release From The National Council Of Clubs

Colorado - The National Council of Clubs, an organization dedicated to protecting the political and legal interests of hundreds of motorcycle clubs and thousands of their members nationwide, is issuing the following statement related to Saturday’s shooting at the Colorado Motorcycle Expo in Denver:

Various media sources have reported that a confrontation between two motorcycle clubs, the Mongols and the Iron Order, resulted in at least one confirmed dead and at least 7 injured during the Colorado Motorcycle Expo Saturday, January 30th. The National Council of Clubs is deeply disturbed by such unnecessary acts of violence at any event, particularly one as well supported by the community over the years as the Colorado Motorcycle Expo, the largest indoor motorcycle swap-meet in the country.

Council of Clubs attorney Wade Eldridge was present at the expo and in fact witnessed much of the confrontation. Mr. Eldridge says that he was present when he saw a crowd of Mongols and Iron Order, approximately a total of 20-30 individuals, gather inside the expo. According to Eldridge there was yelling and a verbal argument ensuing. 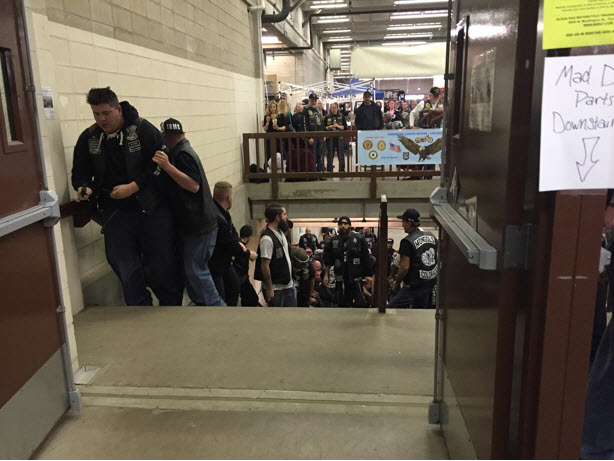 Mr. Eldridge then heard a gunshot. He saw an Iron Order member holding a handgun in his right hand with his right arm extended. According to Eldridge, he heard people shouting, “Put your gun away”. The Iron Order member then dropped his arm and pointed his weapon at the ground, says Eldridge. Eldridge says he reported what he saw to authorities on the scene. Eldridge then called 911 and reported what he saw.

Eldridge’s account is validated by this photo taken by a Council of Clubs participant that happened to be present when the conflict began. This photo was taken following the first shot fired, the source says. The photo shows a member of the Iron Order moving away from the crowd holding a gun in his right hand.

The gun is pointed forward. Eldridge has confirmed that the man in this photo is the same man he saw with a gun extended in his right hand. Eldridge says this man “is the same guy I saw.” This is also the same man identified by eyewitnesses, as reported by many media sources, as the member of the Iron Order that was questioned by police following the shooting. 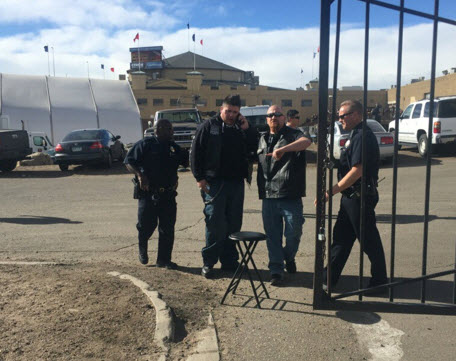 In another photo provided by the same Council of Clubs participant, this same man, following the shooting, is pictured with another Iron Order member (who appears to be posing) and two law enforcement officers. He is not in handcuffs and is in fact being allowed to use a cell phone even though he is suspected of firing shots.

Stephen Stubbs, an attorney for the Mongols Motorcycle Club, stated that members of the Iron Order is predominately made up of police officers and taunted members of the Mongols into an argument that escalated into violence that led to the fatal shooting of a Mongols member.

John C. Whitfield, a lawyer and Iron Order member, confirmed to the Denver Post that Iron Order members include L.E.O.’s. Relating to this specific shooting, Whitfield told the Denver AP, “a Colorado Department of Corrections officer fired his gun during a weekend brawl at a Denver motorcycle show that left one dead and seven others injured.”

The Iron Order Motorcycle Club has been involved in a laundry list of confrontations around the country with other motorcycle clubs that have resulted in violence or death. For example, on June 26, 2014 Florida State Attorney Angela Corey refused to charge Iron Order prospect Kristopher Stone after he shot and killed Black Pistons patch holder Zachariah Tipton in Jacksonville Beach. Corey outrageously ruled the killing was justifiable homicide even though the Iron Order member shot the unarmed Black Pistons motorcycle club member in the face while only a few feet apart.

Iron Order members have not been held accountable for any of the violence or killings that they have been involved in. So far, the same holds true for the incident in Colorado. Police have told the Denver AP that “they have made no arrests and a Department of Corrections spokeswoman did not immediately return calls for comment.”

The Iron Order, which is an off-duty law enforcement officer based motorcycle club, is identified by the ATF to be an “Outlaw Motorcycle Gang.” (See, The ATF Report on OMG’s and the Military, 2014)

The Council of Clubs has obtained and reviewed intelligence that confirms that the Iron Order repeatedly diminishes the relationship between law enforcement and the community they are intended to serve and protect.

According to a 1% club member that was present and has attended the expo for the past 15 years, “There has never been a confrontation, so much as a fistfight. And many 1% organizations have attended including the Hells Angels, Sons of Silence, Bandidos, Outlaws, Mongols, and many others. There has never been a problem until a law enforcement club showed up. Never. It would be against an unwritten code.”

According to another member of a 1% motorcycle club present at the expo, “local and federal authorities that responded to the incident acted in a professional and respectful manor. Authorities contained the crime scene and did not harass or detain members of other motorcycle clubs that were present. Major 1% clubs evacuated the area to allow law enforcement to do their job. Although the expo was later canceled, initially the owner of the venue and law enforcement authorities invited uninvolved clubs back to the expo.”

The National Council of Clubs has a heightened concern with the general demeanor of some law enforcement member motorcycle clubs. The repeated public displays of violence by members of the Iron Order, combined with the conflict they infuse within society, as compared to the intended mission of law enforcement, should be a concern to all citizens, professional law enforcement and government officials everywhere.

The National Council of Clubs will continue to access information related to this incident and will stand by, ready for further comment.


Contact Information:
All inquiries should be emailed to media@councilofclubs.org and addressed to: