Thunder Bay District, Ontario, Canada (November 22, 2019) BTN — A fire Tuesday night destroyed the Hells Angels Clubhouse on Simpson Street. Thunder Bay Fire Rescue says the initial call came in at 10:24 pm. Platoon Chief Edward Hill said more calls were coming in while crews were on their way to the fire, with crews calling a second alarm while heading to the scene. 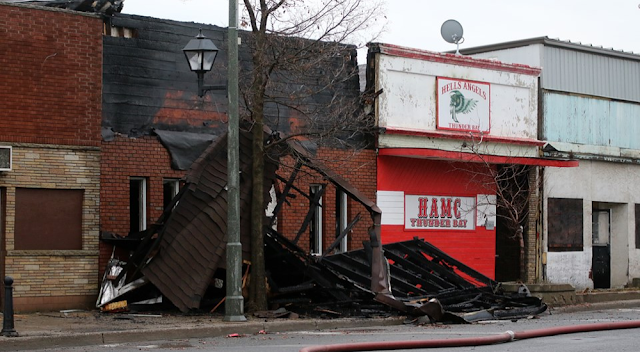 Hill said arriving firefighters found heavy flame and smoke coming from the back of the Hells Angels Clubhouse and the fire was spread into the roof of Rizzo's Cabinets, but they were able to keep it from spreading further.

"We actually managed to make a good stop and the old, I believe it's European Bakery, we managed to keep the fire from spreading into that structure or the Underground Gym that was south of that structure," said Hill. 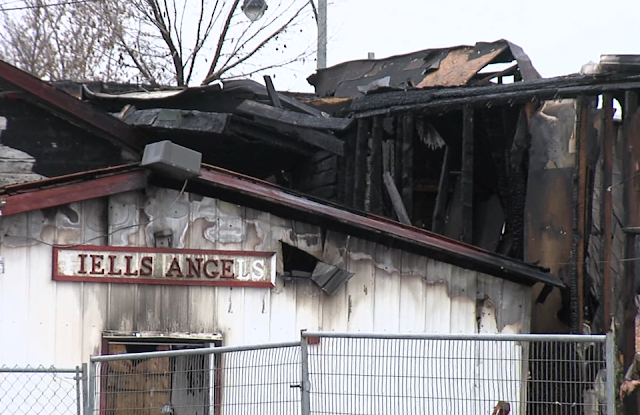 The fire was already deep seated when firefighters arrived to the scene, and crews used a defensive tactic to fight the fire. Aerial ladder trucks were set up at the front of the buildings to protect exposures, while crews started an attack from the rear of the buildings.

"The way it collapsed there's still flames underneath all the collapsed roof structure and it will be a while before we get that out."


Hill said no one was in the building at the time and there were no injuries to firefighters. Hill told CBC, the European Bakery building had some damage from fire fighting suppression activities and the Underground Gym has some water damage.

Firefighters were still on the scene Wednesday morning putting out hotspots and Simpson Street was expected to remain closed for some time for clean up.

Hill said the cause of the fire is unknown and will be under investigation.