Moree, New South Wales, Australia (November 27, 2019) BTN — A former Australian detective has ridiculed National's zero-tolerance approach to gangs, saying the strategy has been a "disaster" across the ditch. The opposition party yesterday proposed setting up an elite police squad - modelled on Strike Force Raptor in New South Wales - with the sole purpose of crushing gangs. 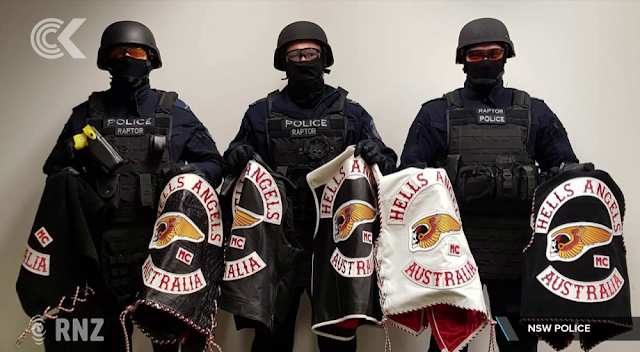 But former NSW detective Mike Kennedy told RNZ that was "nonsense" and Mr Bridges was "living a dream" if he believed that. "He needs to pull his head out of whatever it's stuck in because ... [gangs] exist. They're always going to exist. They just go underground. "I'm not a bleeding heart liberal," he said. "But [the zero-tolerance strategy has] just been a disaster."

Dr Kennedy spent much of his time with the police as an undercover officer working in organised crime and is now a senior lecturer at Western Sydney University. He said there was no evidence to suggest that gang numbers had fallen dramatically since the formation of Strike Force Raptor a decade ago. "Outlaw motorcycle gangs are unregulated, so how would you know?" he said. "They're not required to pay a fee ... and register with government. So any suggestion that the numbers are down is just nonsense."

Dr Kennedy said the problem had just been driven underground. "People don't stop being members of groups just because they've been arrested. They go into jail, they reinforce themselves, they come out, [and] they get more of a reason to remain in the group they're in."

Police officers needed a working relationship with communities, including gang members, so they would cooperate with investigations, he said.

"You need this community to trust you so that when things need to be brought into line, the police are able to go in and speak to people and find out who's ... behaving really badly, and who needs to be put in jail," Dr Kennedy said. "If you want those families to help the police ... then you can't just tar them all with the same brush. And that's what Raptor does."


The elite military-style unit was set up in 2009 following a deadly clash between the Hells Angels and Comancheros at Sydney Airport. The strike force is designed to punish gang members via all legal avenues, coming after them for any infraction, no matter how minor, from a parking fine to a punch-up.

A Nine News report earlier this year stated Strike Force Raptor had made more than 5000 arrests and laid more than 12,000 charges over the past decade. The unit had also seized 1700 illegal firearms and shut down more than 50 clubhouses, it said.

NSW Police declined to provide RNZ with evidence of Strike Force Raptor's success, saying it was not "appropriate" for it to comment on a matter "out of our jurisdiction". The media team also refused to reveal the size of the unit or its annual operating cost.

Speaking to Morning Report, Mr Bridges promised the party would release figures "in the next little while" which would prove the unit's effectiveness. "We are at this moment, in fact, talking to the government in New South Wales to compile the data."