Spokane, Washington, U.S.A. (December 13, 2020) BTN - A Bandidos Motorcycle Club chapter in Spokane began a new holiday tradition Saturday as it unloaded hundreds of dollars in food, blankets, hygiene products and toys from a trailer and onto pallets for the Salvation Army.

“A lot of us belong to groups and we’re constantly wondering how can I or my group impact a community,” Salvation Army Maj. Ken Perine said. “It helps the group with their cohesiveness and it also helps people who they’ll never meet but who will be forever thankful.”

Bandidos MC club members said collecting donations for the Salvation Army was a spur-of-the-moment idea that grew into an organized effort. As they unloaded the donations, a few men wore sequin Santa hats with their red and gold leather or denim jackets. 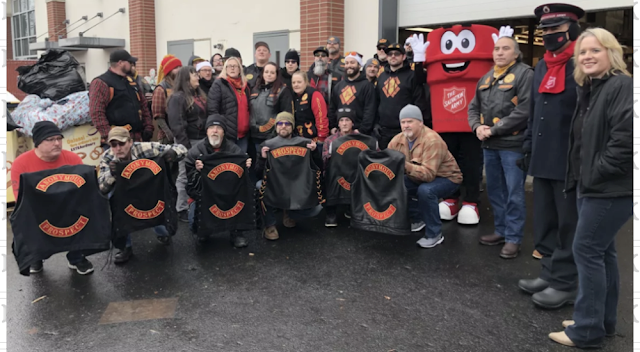 Local club leaders asked their members to bring “as much stuff as possible.” They also set up about 15 holiday-wrapped bins outside local businesses in Spokane, Post Falls and Coeur d’Alene for shoppers to drop donations.

The local Bandidos chapter organized a food drive at a Grocery Outlet in Cheney. The club spent $400 on food and the store matched it, filling giant plastic bins with nonperishable goods.

Cassandra Cram, Community Services Program Manager with the Salvation Army, said the club called her and asked to set it up. She said she expected a regular food drive, but it developed into a drive for a variety of products, plus an event in which Bandidos rode in on their bikes to unload the truck of food.

She hopes it will inspire other clubs to jump in to help their community. “All they gotta do is notify us,” Cram said . “If they want to do something, just do it.”

Perine told the group, despite all their work, they won’t get to see the people receiving their donations. “But we do,” Perine said. “One of the reasons we get to do what we do is because of people like you.”

Perine described how during a recent toy drive at Target, a woman came in with several interactive, animatronic teddy bears to donate. “We’d helped her years ago and she said it was her chance to give back,” Perine said. “She was just so happy to be able to give back.”
SOURCE: The Spokesman Review
Email ThisBlogThis!Share to TwitterShare to FacebookShare to Pinterest
Labels: 1%er News, Bandidos MC, Harley-Davidson, Motorcycle Club
Newer Post Older Post Home