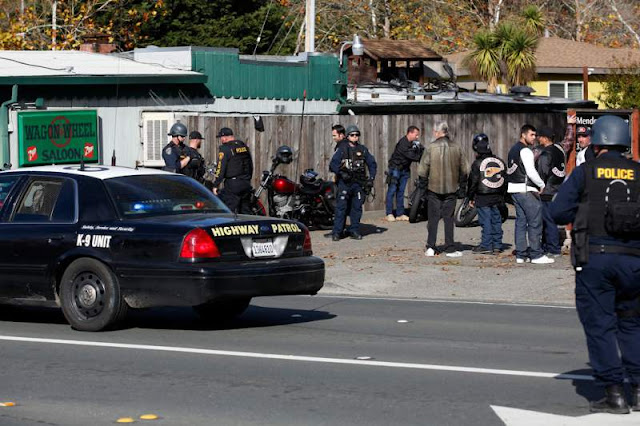 An FBI spokesman said the operation was conducted under a sealed federal warrant, but neither he nor local law enforcement officials would say who the operation was targeting or how many locations were involved.

However, witnesses at the Wagon Wheel Saloon around noon said they saw motorcycles being seized and riders detained outside the bar on Mendocino Avenue.

A tactical team from the FBI was on site, as were a number of CHP officers and the armored SWAT vehicle shared by the Santa Rosa Police Department and the Sonoma County Sheriff’s Office. Some of the heavily armed officers wore full tactical gear, including Kevlar helmets and bulletproof vests, and wielded assault rifles. No shots were fired or physical altercations reported. 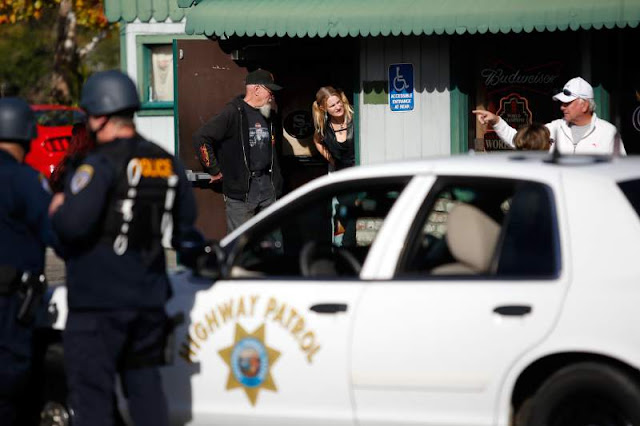 Santa Rosa Police Chief Hank Schreeder said there was a “significant” number of Santa Rosa officers and detectives who assisted the FBI in the operation, which later also involved an armed search of an Antelope Lane home, 6 miles to the south in the city’s Bellevue Avenue neighborhood.

Prentice Danner, the FBI spokesman, confirmed that arrests were made but declined to say how many. The federal warrant will be unsealed Monday, he said, when the agency plans to share more information at a San Francisco press conference. 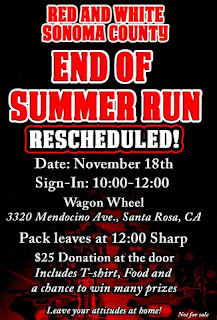 The Wagon Wheel Saloon was the scheduled departure point Saturday for a Hells Angels Motorcycle Club ride billed as the “Red White Sonoma County End of Summer Run,” according to the website of the group’s Sonoma County chapter. The previously planned ride had been rescheduled due to last month’s fires.

One rider said he traveled Saturday from Fort Bragg with a group of about 10 fellow motorcyclists for the scheduled ride. As riders were outside the bar “starting up their bikes” and getting ready to head out, he said, a swarm of law enforcement appeared.

“They just surrounded the place and wouldn’t let anybody go anywhere,” said the rider, Dan, who would only give his first name. Officers eventually allowed some riders, including him, to leave. Though he was separated from the rest of his group, he said.


Multiple riders in front of the bar Saturday were seen wearing vests with Hells Angels’ patches on them. Authorities would not elaborate on what ties, if any, the club or motorcycle riders in general had with the police action.

A Wagon Wheel bartender who refused to provide his name indicated that the establishment appeared not to be the target but a staging ground for the police raid. 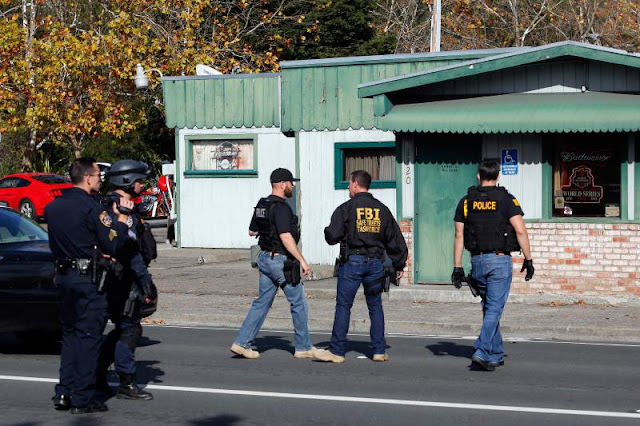 “All it did was ruin a perfectly good afternoon,” he said. “It was a cheap party, (the police) didn’t even bring a helicopter.”

About 12:30 p.m., Santa Rosa police issued a public notice advising people to avoid the Mendocino Avenue block where the Wagon Wheel is located, between Administration Drive and Bicentennial Way. 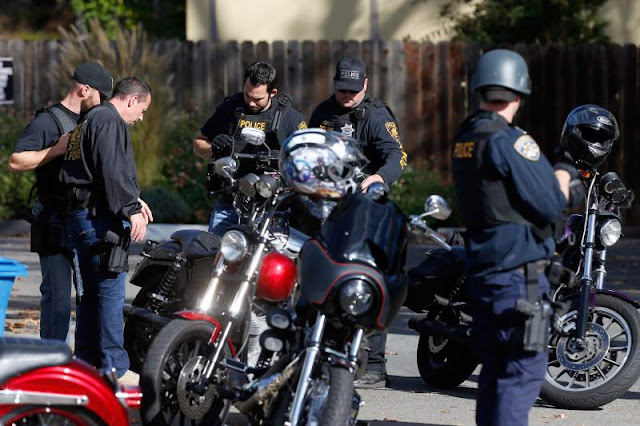 The block was reopened by 2 p.m. and law enforcement left. A handful of bikers in leather Hells Angels vests lingered outside of the bar but refused to comment. Others drove off on their Harley-Davidson's toward Highway 101. Groups of motorcycles, including Hells Angels riders, were later reported as they were seen by officers traveling in the area and across Sonoma County, according to radio dispatch traffic.

After 2 p.m., FBI officials were seen surrounding the home off Antelope Lane, where they reportedly used concussion grenades in a search that the FBI spokesman confirmed was related to the raid at the saloon.
Roughly a dozen FBI agents were staged outside the home about 3 p.m. 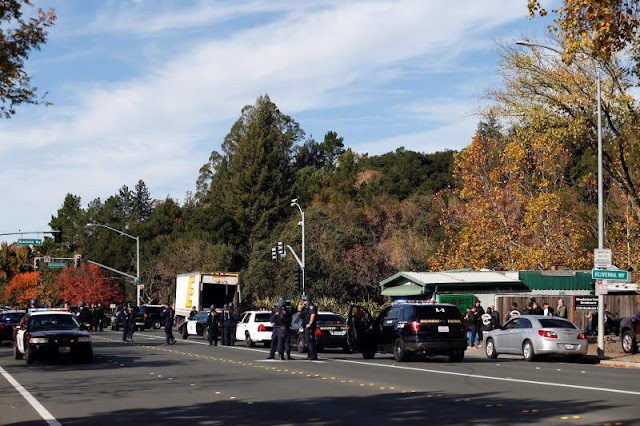 Law enforcement had the road shut down during the raid

They wore camouflage uniforms and bulletproof vests and carried assault rifles. A Santa Rosa Police detective assisting at the scene described the search as connected with an FBI case. FBI agents on the scene refused to comment.

As the search was underway, a man who said he lived at the residence sat outside on a fire hydrant. The man, who refused to share his name, had not been detained.

An owner of the Wagon Wheel could not be reached late Saturday. A representative of the Sonoma County Hells Angels did not return a phone call seeking comment. 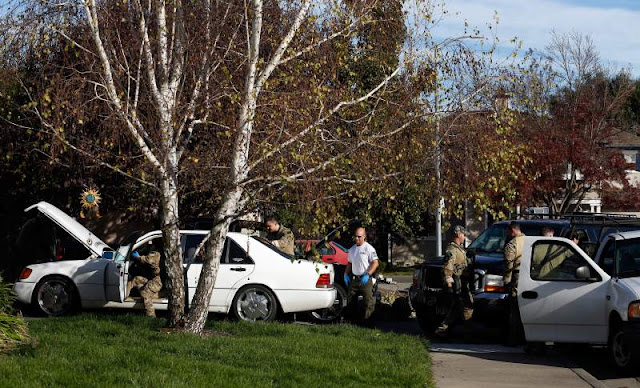 Law enforcement searching a vehicle during the raid at a home

At the Wagon Wheel on Saturday afternoon, a man who declined to provide his name for fear of his safety, said he pulled over near the bar about 1 p.m. and saw in the area at least two dozen law enforcement officials, including CHP and FBI representatives as well as police dogs. He said he saw authorities confiscate Harley-Davidson motorcycles and load them into a truck.

“You could see them bringing out motorcycle after motorcycle,” the man said. “This was all a big, preplanned thing.”