San Antonio, Texas, USA (May 10, 2019) BTN — A member of the Bandidos motorcycle club pleaded guilty Thursday to retaliating against an informant after he threatened to kill a witness who helped the feds convict the motorcycle club’s top two leaders. Albert DeLeon, 45, made the threat on Feb. 22 against the witness, whose name hasn’t been released, at a local H-E-B store.

“He was a personal friend of the witness and felt horribly betrayed, and let off some steam when he confronted him at the grocery store,” DeLeon’s lawyer, Jesse Rivera, said in an interview.

Several informants — most of them former members of the club from San Antonio who got reduced sentences for their crimes — testified last year at the three-month trial of then-national president Jeffrey Fay Pike of Conroe and ex-national vice president John Xavier Portillo of San Antonio. 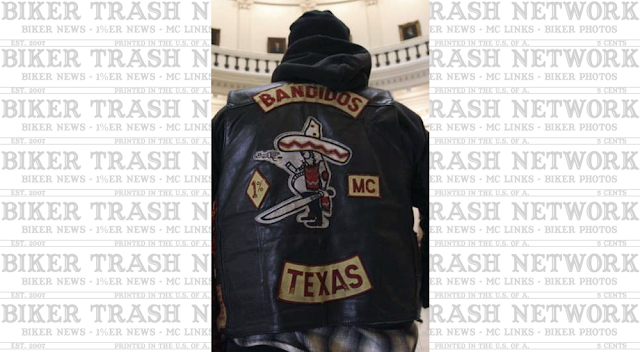 The organization’s leaders were sentenced to life in federal prison in September after being found guilty of crimes that included racketeering conspiracy, murder, extortion and drug dealing. The trial gave a vivid look inside the Bandidos’ secretive operations.

It also delineated attacks the Bandidos plotted or carried out on rival bikers as the club flexed its muscle to protect what it considered its home turf — the state of Texas. The trial also shed light on internal bickering that resulted in a split of the Bandidos in North America with its numerous chapters in Europe and Asia. Government witnesses testified that the leading dissidents were violently ousted on orders from Pike.

DeLeon’s plea agreement said DeLeon made eye contact with the witness inside a local HEB.

DeLeon called another Bandidos member to the scene. Together, they approached the witness outside the store as he was in his car, and DeLeon mouthed off, according to court records. The statements included: “Get out, you’re going to die today,” “You’re a (expletive) snitch, we saw you on the news,” “It’s your fault everyone in the club went down,” I”m going to (expletive) kill you,” and “Jeff and John went down because of you.”

DeLeon also pulled a handgun from his waistband and “cocked it” to put a round in the chamber, but put the weapon away when other shoppers looked toward them, the plea deal said. The witness quickly left the scene.

DeLeon faces up to 20 years in prison, without parole, when Biery sentences him in August.