Disclaimer: This is a recent story, in it's entirely posted by KWTX-TV News 10 out of Waco, Texas. We have opted out of correcting misinformation so our educated readers can see for themselves the ludicrous accusations made by the main stream media regarding this tragic event. Below is their fabrication, including headline. We filed this story under our Propaganda Tag. - Biker Trash Network

New 'credible threats' made by bikers against local police

Waco, Texas, USA (December 13, 2019) BTN – It appears some of the key players in the Twin Peaks shootout can't seem to let go, even though the McLennan County District Attorney's Office dropped all of the pending cases against bikers earlier this year. 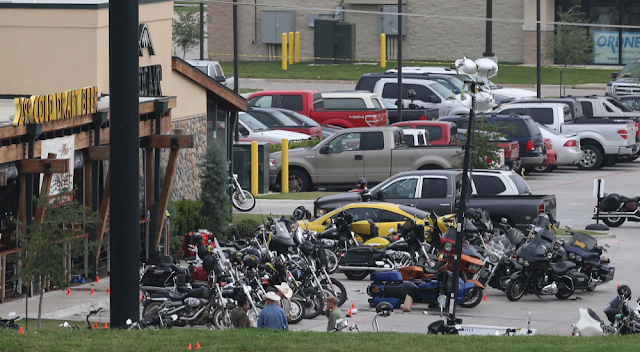 According to multiple sources with direct knowledge of the situation, within the last two weeks, memos were sent to several local law enforcement agencies about a meeting between two top biker groups--the Bandidos and the Outlaws--seeking revenge against police.

The Bandidos and Outlaws are both classified by the Federal Bureau of Investigation as Outlaw Motorcycle Gangs (OMGs).

The FBI and the Texas Department of Public Safety have yet to confirm the existence of these memos to KWTX, however, several local law enforcement sources have.

The first memo, sent last week, said law enforcement had received information that the Bandidos and the Outlaws were attempting to hire Bolivian nationals to carry out three hits on officers: two in Waco, and one in Florida.

The memo called the threat 'credible.'

The DPS, the Waco Police Department, the McLennan County Sheriff's Office and several judges were made aware of the threat, sources confirmed to KWTX.

Then, on Wednesday, the threat was supported by information obtained by an an out-of-state agency.

Local departments were sent a memo saying a confidential informant with the Oklahoma State Bureau of Investigation reported that the Bandidos and the Outlaws and their support clubs, are attempting to do contract hits on officers in Waco, Florida, and possibly against other law enforcement officers nationwide.


On May 17, 2015 nine bikers were killed and more were injured as a result of what authorities say was a turf war between rival gangs--the Bandidos and the Cossacks--at the Twin Peaks restaurant at Central Texas Marketplace in Waco.

177 bikers were arrested but none were ever convicted of a single crime in connection with the shootout.

In April, the new McLennan County DA, Barry Johnson, dismissed the charges against the last of the bikers with criminal cases pending.

A spokesman for the DA's office told KWTX Thursday they know nothing about these memos or threats.

The FBI provided this statement:

"While our standard practice is to decline comment on specific law enforcement bulletins, the FBI routinely shares information with our law enforcement partners which identifies potential threats to law enforcement officers and the communities they serve. The FBI also directly notifies individuals and organizations of information that may be perceived as potentially threatening in nature."

Local law enforcement sources would not comment on the police response to the information contained in the memos, but did say they're "being more vigilant."

While Twin Peaks happened more than four years ago, it's fair to say it hasn't been forgotten, and, if anything, appears to have only emboldened some of those involved.

KWTX attempted to make contact with both the Bandidos and the Outlaws through their websites, but had not heard back as of Thursday night.