Lithgow, NSW (September 24, 2018) BTN — Four members of the Finks MC have been charged by Strike Force Raptor over an alleged road rage incident in the Blue Mountains.

Just before 3.30pm on Saturday, June 9, a group of Finks MC members and associates were travelling city bound on motorcycles and in cars on the Great Western Highway, Blaxland, when they allegedly became involved in an altercation with the occupants of a white BMW at traffic lights at Layton Avenue. 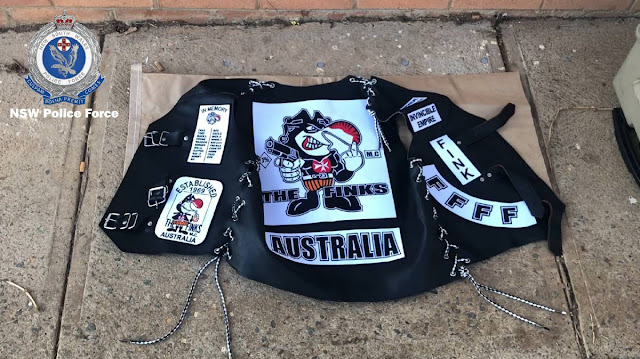 A short time later, officers from Blue Mountains Police Area Command drove across the incident and spoke to those who were on scene, however, many of the riders had already left the scene. Police were told the BMW and one of the bikes collided, causing the rider to come off the bike. He was not injured.

Members of the group then allegedly hit and kicked the BMW while the occupants remained inside.
Officers from the Criminal Groups Squad’s Strike Force Raptor also attended the scene and assisted with speaking to the remaining members of the group before commencing an investigation.

During the searches, police seized Finks MC colours and paraphernalia, cannabis, and other items relevant to the investigation.

Three Finks MC members – aged 22, 27, and 47 – were arrested during the operation and taken to Riverstone Police Station. An unidentified Finks MC member is arrested
The 27-year-old man was charged with affray and destroy/damage property intend criminal activity of group.

He appeared at Parramatta Bail Court on Saturday, September 22.

The 47-year-old man was charged with affray, destroy/damage property intend criminal activity of group, and possess prohibited drug.
They were granted strict conditional bail and are due to appear at Mt Druitt Local Court on Wednesday, October 10.

A fifth search warrant was executed at a home at Dapto, where investigators arrested a 20-year-old man.

He was taken to Lake Illawarra Police Station and charged with destroy/damage property intend criminal activity of group and two counts of possess prohibited drug.

The man, who is a Finks MC prospect, was granted strict conditional bail and is due to appear at Port Kembla Local Court on Wednesday, October 17.

Inquiries are continuing and further arrests are expected.