Fairmont, West Virginia, USA (August 28, 2019) BTN — Jason “Jay Bird” Edward Harris of Fairmont, is being held on a $1,000,012 bond on one count each of attempted murder and conspiracy to commit a felony. Harris was one of four men who carried out a pre-planned attack on a New York man on Aug. 3 outside of the BFS Foods convenience store in White Hall.

During the fight, the attackers struck Kenneth Murphy of Hilton, N.Y. with a baseball bat, as well as cut and stabbed Murphy with a knife.

“This is based upon a police investigation which is supported by physical evidence, surveillance video, witness statements, and personal observations,” states the complaint. 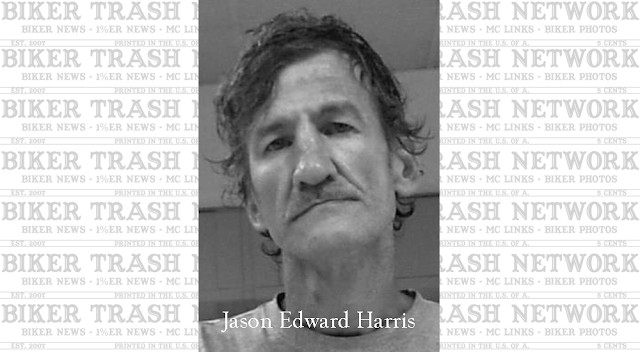 Harris, a member of the Pagan's Motorcycle Club, was arrested Friday night in Fairmont after staff with the U.S. Marshals Service in Clarksburg received a confidential tip. Witnesses at the scene the day of the attack said Murphy was wearing a Hells Angels Motorcycle Club jacket.

Murphy was transported to Ruby Memorial Hospital in Morgantown where he was placed in a medically-induced coma for treatment, according to the criminal complaint.

Harris’ arrest is the third in the Aug. 3 melee.

Along with Harris, White Hall Police charged James Cody Biggie, 37, of 202 Skyline Dr., of Rivesville, and Bruce Evan Davis, 53, of 135 Pine Ln., of Fairmont, with attempted murder and conspiracy to commit a felony.

According to the original criminal complaint, Biggie and Davis, along with Harris and a fourth man, carried out what police called “a pre-planned physical confrontation with several male individuals in the parking lot of the BFS Foods in White Hall.”

The incident has been described as a fight between the Hells Angels and Pagan's motorcycle clubs. At 1:50 p.m. on Aug. 3., a Monongalia Emergency Centralized Communication Agency 911 report stated there was “a fight/stabbing in Fairmont between Hells Angels club and Pagan’s Motorcycle Club, and that one of the Hells Angels members was being transported to Ruby Memorial Hospital.”

Since their arrests, Davis and Biggie have appeared in court where their attorneys asked that their bail be reduced.

Police are still searching for the fourth suspect in the case. That suspect’s name has not been released.

If found guilty of attempted murder, Harris could face 15 years in prison.