Haarlem, Netherlands (August 12, 2019) BTN — More than twenty members of the new motorcycle club MC Hardliners posed in full colors on the platform of the Haarlem city hall on Thursday afternoon. The photo session was with the back to the camera. MC Hardliners was founded from prison by Lysander de R., the former leader of the Haarlem Hells Angels. 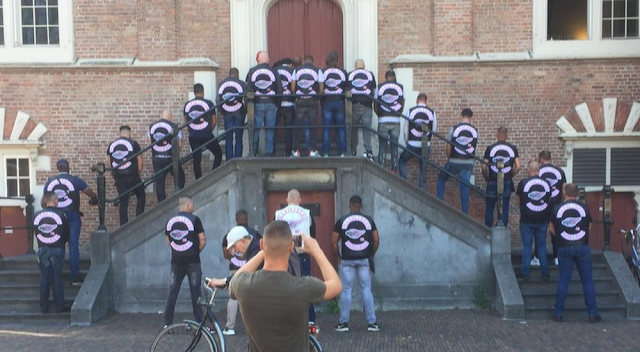 According to Noordhollands Dagblad, the municipality of Haarlem does not want to respond to this provocation and the police do not want to say much. At least 25 especially young members of MC Hardliners posed with their backs to the camera on the steps of the Haarlem city hall on Thursday afternoon. Around 5.30 pm the police asked the club members to leave the catering business in the center because wearing full colors in public is not permitted. The members left without problems. Almost a week earlier, around eight Hardliners drove through the center in Haarlem with a lot of noise on their motorbikes.

The photo session at the town hall is striking. The MC Hardliners are looking for a clubhouse in Noord-Holland and perhaps Haarlem. Earlier, mayor Jos Wienen of Haarlem closed the clubhouse of the Hells Angels. Wienen has been threatened since September 2018. It is unclear who is behind those threats, but outlaw motorcycle gangs are also mentioned in this context.

When it became clear in Haarlem last year that Wienen was being threatened, there was a well-attended demonstration on the Grote Markt in support of the mayor. The members of MC Hardliners posed on Thursday exactly where Wienen stood and spoke on 14 October (the landing of the town hall). 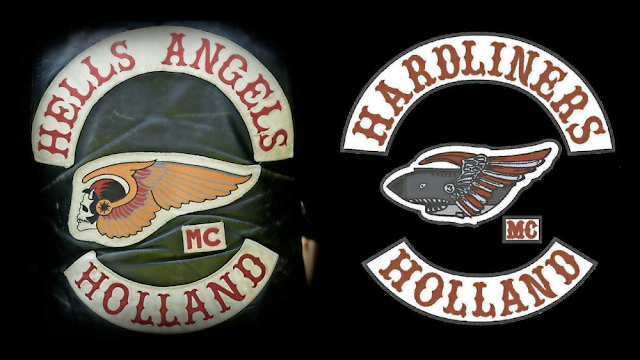 Logo The logo of MC Hardliners is very similar to that of the Hells Angels (see photo). The font of the emblems is the same, the color red-white and also the wing is prominent, but instead of a skull there is a shark.

Lysander de R., former leader of the Haarlem Hells Angels, founded MC Hardliners from prison in May. The R. was sentenced to nine years in prison last year because he was guilty of mistreatment, extortion, threat, arson and possession of weapons with two other leaders. Previously it had been claimed against him for fourteen years . He will be detained until at least November 2022. According to the court, a 'rock-hard and beastly chapter' was created under the leadership of De R. in which 'a real reign of reign' was conducted in Haarlem and the surrounding area.