Montreal, Canada (June 22, 2019) BTN — Hundreds of Hells Angels from across Canada showed at an Urgel Bourgie funeral home on Beaubien St. E. in Mercier—Hochelaga—Maisonneuve to mourn the loss of André (Frisé) Sauvageau. Hundreds of local and provincial police officers were also on the scene, while a helicopter flew overhead. 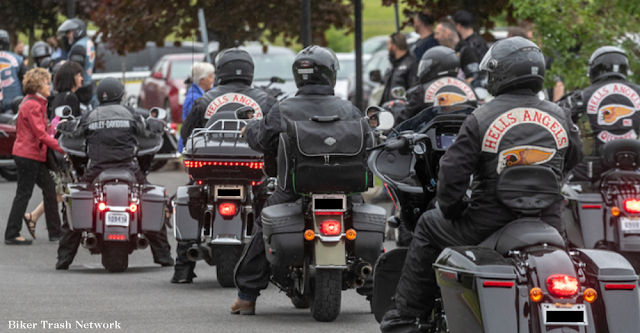 It was Dec. 19, 2000, and Sauvageau, a founding member of the Rock Machine, had spent the previous six years looking over his shoulder as the two groups fought over turf in Montreal. Police never identified the person on the other end of the line, but the call came from a cellphone owned by Richard (Dick) Mayrand, who was at the time one of the most powerful Hells Angels in Quebec.

During the call, Sauvageau was told that, as far as the Hells Angels were concerned, “the door (was) always open” to him. He defected to the Hells Angels soon after and remained a member of the club till his death May 26.

Under a cloudy sky Thursday morning, hundreds of Hells Angels from across Canada showed up in force at an Urgel Bourgie funeral home on Beaubien St. E. in Mercier—Hochelaga—Maisonneuve to mourn the loss of Sauvageau.

Club members arrived in groups, many of them on Harley-Davidson motorcycles, between 10:30 a.m. and noon. By the time the funeral was slated to begin, there were about 100 motorcycles in the parking lot, and an equal number of cars, pickup trucks, SUVs and minivans.

Most of those going into the funeral home were wearing leather jackets that had Hells Angels patches or names of other supporting clubs, like the Red Devils and the Reapers with names of cities and regions: Halifax, British Columbia, New Brunswick, Regina, Richelieu Outaouais, Laurentides and Lanaudière. The majority were from Montreal. 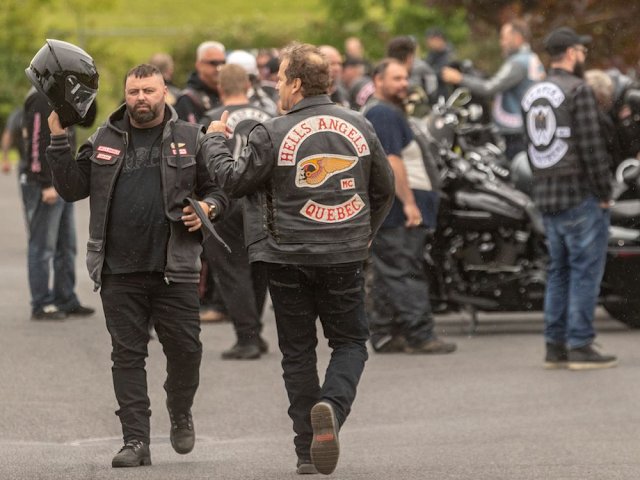 All were men and white, and most were middle-aged with long beards. About a dozen milled around at the building’s rear door, while several stood at the front door, apparently acting as security agents.

“You’re not getting in here; don’t make me have to tell you again,” one of them told a reporter.

Hundreds of Montreal Police and Sûreté du Québec police officers were also on the scene, arriving on motorcycles, vans and unmarked cars. A helicopter flew overhead. A mobile command post was set up a block away, and three officers were posted at the entrance of the parking lot, with one officer taking photographs of the licence plates of the cars that entered and another writing them down.

About 10 other agents were posted in several spots in the parking lot and around the funeral home.

The sight of so many Hells Angels paying tribute to Sauvageau would have been inconceivable during the 1990s while the Rock Machine clashed with their rivals. As a founding member of the Rock Machine, Sauvageau was a high-priority target for the Hells Angels during Quebec’s biker war, a conflict than began in 1994 and resulted in the deaths of more than 160 people before it came to an end in 2002.

On Oct. 18, 1997, Sauvageau and two other men were almost killed when someone tried to shoot them while they were standing outside a duplex on Pierre Blanchet Ave. in Rivière-des-Prairies. No one was injured in the attempted hit, but the police believed the Hells Angels were behind it because the shots were fired from a passing minivan, the type of vehicle Hells Angels were using for hits at the time.

Sauvageau was also involved in the violence of the biker war. On May 8, 1997, just months before someone tried to kill him, a powerful bomb was set off in front of a club the Hells Angels controlled on St-Laurent Blvd. No one was killed in the early-morning blast, but Peter Paradis, a Rock Machine member who became a prosecution witness during the biker war, later testified in at least two trials that he set off the bomb on orders from Sauvageau.


Weeks before the call to Saveaugeau was made in 2000, the Hells Angels had offered their rivals a brief truce and then sought to recruit members of the Rock Machine they considered worthy of becoming Hells Angels.

The truce was agreed to in 2000 because, at the time, Rock Machine members had just become probationary members of the Bandidos, another international motorcycle club. The Hells Angels in Quebec hoped to prevent the Bandidos from breaking ground in Canada and saw the truce as an opportunity to steal away as many experienced drug traffickers from the probationary Bandidos as they could.