Toronto, ON, Canada (June 6, 2019) BTN — As the weather turns warmer, a new joint effort by police across Canada is focusing on educating people about the risk motorcycle clubs pose to communities.

The RCMP, in a joint effort with the Canadian Integrated Response to Organized Crime, is co-ordinating a social media effort with the hope of raising the public's awareness of the dangers motorcycle clubs pose.

"In the Bombard investigation, we had murder, drug trafficking, there's other types of violence," said Supt. Deanna Hill, the federal criminal operations officer for RCMP N.L. 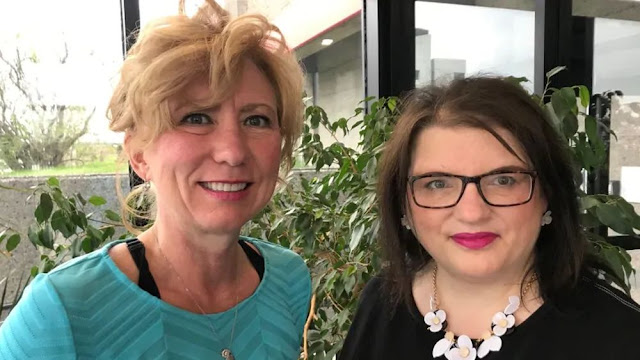 Supt. Deanna Hill, left, and Glenda Power are part of a Canada-wide campaign to educate the public about motorcycle clubs. (Paula Gale/CBC)

Hill said it's taken her years of working exclusively on motorcycle clubs units to learn how to identify a member easily, but the general public may not know how to read the signs.

That's the point of their campaign, she said.

"The Hells Angels continually adapt. They adapt their strategies, they adapt how they infiltrate communities, and it's all about making money through crime," she told CBC's St. John's Morning Show.

"For us to be effective we need to continually adapt as police agencies both in our technologies and our strategies, and this particular effort, we hope, will set the tone and raise awareness for the public, just the level of intimidation and violence." 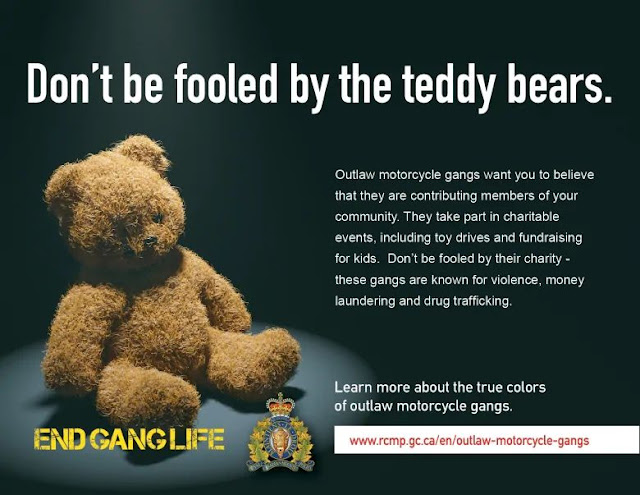 The RCMP effort to raise awareness about motorcycle clubs warns people not to be fooled by charity work. (RCMP)

The campaign is also a way for police to counter public relations strategies launched by these kinds of clubs, who get involved in charities and donations.

"The motivation is to put out there that they are harmless, and they are simply not harmless. They commit crime that impacts our community," Hill said. "They're engaged in money laundering, they're engaged in every kind of effort that will result in a profit, and in order to get that profit they'll engaged in violence and intimidation. So it impacts innocent people. It impacts all of us on a broad scale, although you might not see it on a daily basis."

They want you to report interaction with motorcycle club members


Hill acknowledges the average person might not be able to tell a bike gang member from a regular motorcycle owner.

"There are a lot of absolutely harmless riding clubs, motorcycle clubs out there, that are just the general public doing absolutely nothing wrong," she said. "Generally a three-piece patch with a 1% diamond on there, on any of their paraphernalia, is indicative of some kind of outlaw motorcycle gang."

Glenda Power, RCMP N.L.'s director of strategic communications, said the campaign is not about trying to make people afraid.

"We're not trying to scare the public here. We're trying to inform," Power said. "Often, gang violence is directed at other gangs, not against public citizens — although we have seen that recently here in this province. But you need to be informed to make good choices."

Power said anyone who thinks they may have had an interaction with a motorcycle club member, but isn't sure, should contact police. "Our advice for the public is, call your local police if you feel you might be dealing with someone who's part of an outlaw motorcycle gang. Report that interaction," she said.

"But if you are aware that someone is in an outlaw gang, we certainly recommend that you do not engage."