Clarksville, TN, USA (June 11, 2019) BTN — A man wanted in the motorcycle club slaying of two men in a restaurant parking lot on Wednesday was stopped after the shooting and released, only to be named the prime suspect days later.

Michael Clarence "Hulk" Craft, 36, turned himself in on Saturday after several days of investigation by police, according to police spokesman Jim Knoll.

He was booked on two counts of homicide. 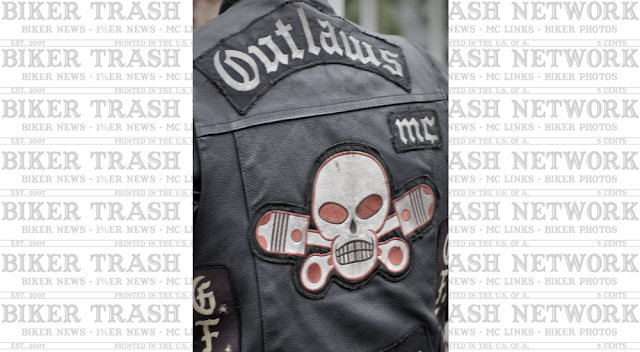 At about 8:30 p.m. Wednesday, police found two Clarksville men with multiple gunshot wounds in the Longhorn Steakhouse parking lot, according to court records obtained by The Leaf-Chronicle.

James Ramsey, 37, died at the scene. John Allgood, 53, was taken to Tennova Healthcare, where he died from his wounds.


Witnesses at the scene told police that the men were shot by several members of the Outlaws Motorcycle Club and that they had fled on motorcycles, the arrest warrant said.

Craft was pulled over shortly afterward about 5 miles from the scene, and he was wearing an Outlaws T-shirt turned inside-out. In his saddle bags were a folded Outlaw MC vest and a loaded 9 mm Taurus Millennium G2 pistol. The pistol was loaded with Luger rounds that matched shell casings found at the scene, the warrant said.

Craft first denied being in the area, but later said he might have driven through. He was released by police. Knoll said Monday that there was not enough evidence to hold him at the time.

Investigators later reviewed surveillance footage from the Tilted Kilt restaurant, about 100 yards from Longhorn, that showed Craft leaving Tilted Kilt about 12 minutes before the shooting, the warrant said.

During a subsequent autopsy, bullet fragments were found that were consistent with the Luger rounds in Craft's pistol, according to the warrant.

On Saturday morning, after a search in multiple locations for Craft, police secured a warrant for Craft's arrest and put out an alert to find him. Craft turned himself in Saturday night.

Mayor Joe Pitts was among many people inside the restaurant at the time. He called the incident a rival motorcycle gang shooting and said the shooter sought out his victims.

A Leaf-Chronicle review of court records shows the only violent criminal history for Craft involved a domestic assault charge in a February 2010 incident. That case was given a “nollie” dismissal.

His first court date will be June 17.

The investigation is ongoing, Knoll said, and police are following other leads in the case.