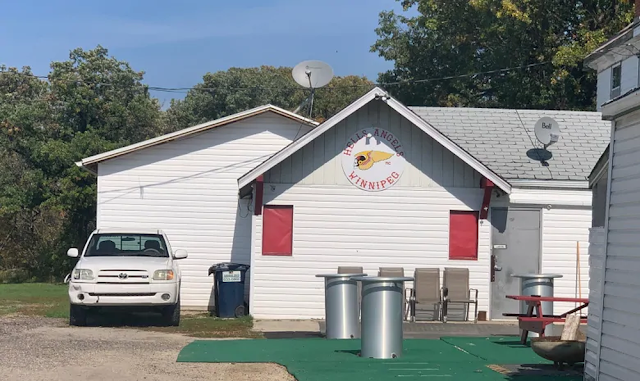 Winnipeg police executed search warrants at two Hells Angels clubhouses in Manitoba in December 2018, including this property on Road 65 N. in the rural municipality of Rosser.

Police affidavits say the informants told investigators there is a set price for booze at the clubhouse bars and the Angels believed that law enforcement couldn't investigate them if they put up signs that said "Donations."

The details were sealed by a provincial court judge in December but the documents were recently unsealed, although some information was redacted to protect the identities of confidential informants.

"Each clubhouse advertises that any alcoholic drink or non-alcoholic drink is not for sale but individuals can 'donate' the $3 or $5 to the Hells Angels," the police affidavit says.

Police were told the Hells Angels have a book behind the bar with a running tab for people who owe money for drinks, and the motorcycle club put the money in a bank account along with proceeds of their clothing sales — an account with more than $60,000 in it, the affidavit says.

To verify some of the source information they received, police said they relied on a number of things, including statements they got from officers in the organized crime unit who had observed the bar while arresting a suspect in the Redonda Street home in 2017.

Police said they also saw photos of a fully stocked clubhouse bar and fridge on the Facebook page of a prospective member of the Hells Angels and in the background of photos of a woman wearing support gear on the Manitoba Nomads website, which sells Hells Angels support clothing to the public. 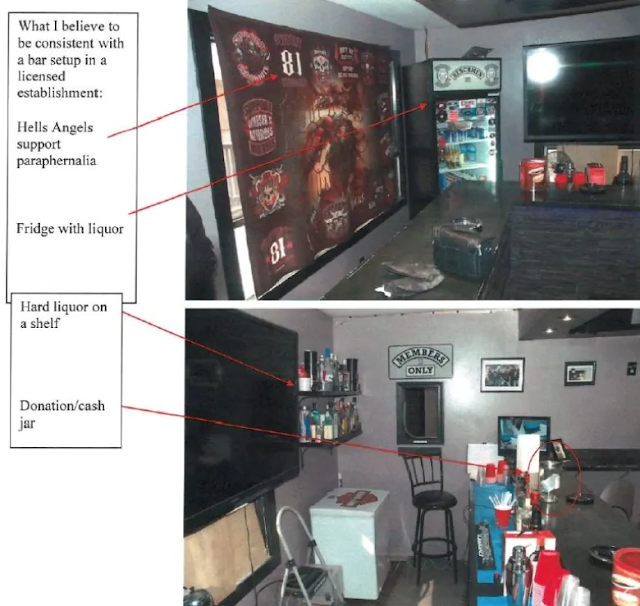 Winnipeg police search warrant documents say the Hells Angels were selling liquor inside two Manitoba clubhouses without a licence to do so, and the setup included a donation jar to keep law enforcement away. (Provincial Court of Manitoba)

"I think there's all sorts of criminal activity in Hells Angels, but I think that the liquor licence type stuff is, I don't know.… I just don't see it as something that's going to make the streets safe."

Last December following the raids, Winnipeg police charged three men for selling liquor without a licence: Dale Donovan, who now goes by the name Kelland and is the president of the Manitoba Nomads, which is a chapter of the Hells Angels; Lorne Corlett, a full patch member of the gang; and prospect Cameron Barron.

The crime is punishable by a fine of up to $100,000, up to a year in jail, and forfeiture of any items seized by law enforcement.

In the 43-page search warrant documents, police said they received photographs from other Canadian police agencies that had conducted similar raids that showed "donation bins" posted in other Hells Angels clubhouse bars.

In search warrant documents, Winnipeg police say in September 2018 a Hells Angels prospect posted these photos on his Facebook page. Officers said the photos were taken in a Hells Angels clubhouse and show a fully stocked bar, which supports allegations they were selling liquor without a licence. (Provincial Court of Manitoba)

"It's an incredibly sophisticated organization with significant financial backing, so it makes it very difficult for police to take action against them," said Kelly Sundberg, an associate professor in the department of economics, justice and policy studies at Mount Royal University in Calgary.

"The police are limited by geography and by budgets. The Hells Angels are not."

Sundberg said regulatory approaches are one of the only tools police have to combat criminal organizations like the Hells Angels. 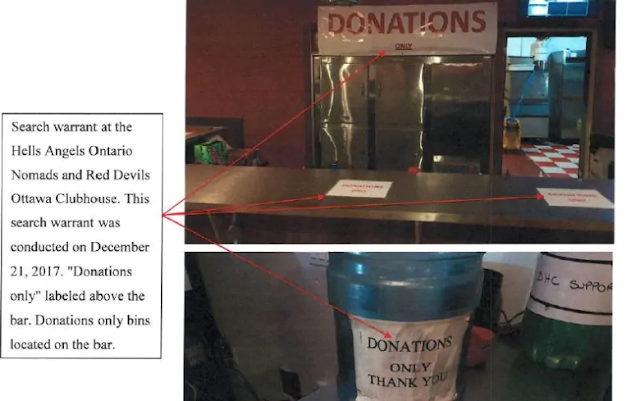 "With the hopes that by taking that regulatory action against the organization that they'll discover a criminal act that will open the door for a criminal investigation that allows them to proceed on larger charges," Sundberg said.

Edwards, who has written 10 books on organized crime, understands why police would crack down on the Hells Angels in any way that they can, but he believes investigations like this will do nothing more than garner sympathy for them.

"They're not gonna keep piles of cocaine laying on the table in their clubhouse," Edwards said.

"What they're trying to do is crack down on criminal activity, drug trafficking, and this sort of thing is kind of, it's sort of a nuisance thing but its not going to put anyone out of business."

The Hells Angels have a long record of violence in Canada, including the murder of two justice officials in Quebec in 1997. In the late 1990s and early 2000s, the Quebec branch of the Hells Angels was warring with a rival outlaw motorcycle gang, the Rock Machine. That resulted in an estimated 150 murders over the course of a decade, and extensive drug trafficking and related crimes in Manitoba, the RCMP and Manitoba Justice say.

In 2014, Manitoba became the first government in North America to formally list the Hells Angels as a criminal organization. Similar designations have been made in Ontario and British Columbia.

But Sundberg said over the years, the Hells Angels have worked hard to change their public image by holding fundraisers for charity and organizing community events.

"I would not be surprised if the Hells Angels secure some of the best marketing and communications people money can buy. They've done an excellent job … in steering that lens of criminality away from them and even put it into the minds of the public that they are in fact a legitimate organization."

He said the narrative the Hells Angels present today is that the negative press has been manufactured by law enforcement and that they've been unfairly targeted.

"The Hells Angels are incredibly sophisticated. They have some of the best lawyers and accountants. The resources available to them, they're global in scope," Sundberg said.