Twin Cities, Minnesota, USA (September 23, 2019) BTN — The funeral for Eric Voshell, an Oak Bluffs man killed in a shooting at a Fall River bar one week ago, was held Friday morning at St. Augustine’s Church in Vineyard Haven.

The funeral drew hundreds of mourners, including dozens of bikers wearing gear from their motorcycle clubs and breaking the quiet with their motorcycles, slowing traffic on Franklin Street and Vineyard Haven side streets.

Court records indicate that Voshell, a member of the Hell’s Angels affiliate The Sidewinders, was killed during a fight with a rival motorcycle club known as The Outlaws. 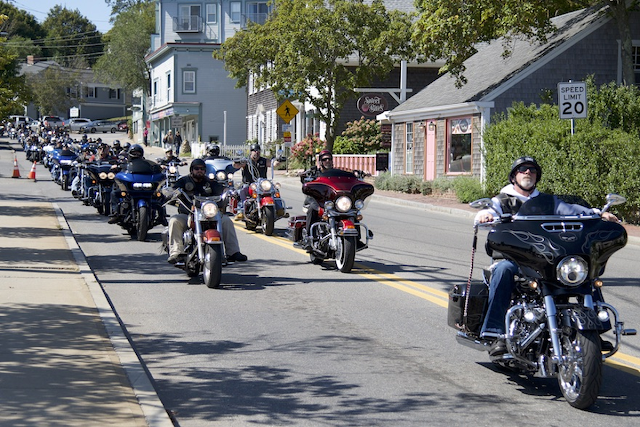 There was a heavy police presence outside the church with both Tisbury police and State Police on hand. Tisbury Police Chief Mark Saloio, who could be seen on Franklin Street, could not immediately be reached for comment on who requested the police presence. Many bikers came to the Island on Thursday for Voshell’s wake to pay tribute to him and their presence created a buzz in ferry lines.

After the funeral, about 100 motorcycles followed the procession down Spring Street and into Five Corners headed for the cemetery in Oak Bluffs.

Voshell owned Reliable HVAC Co. and was an Oak Bluffs firefighter before being seriously injured in a motorcycle crash in July of 2018.

Joseph “JoJo” Noe, 25, is charged with murder and various other charges in connection with Voshell’s death. He pleaded not guilty in Fall River District Court Monday and is being held without bail.


Meanwhile, a GoFundMe has been set up for the family of Eric Voshell following the shooting that took his life. The fundraiser, titled “Eric’s Girls,” was set up by Jeremy Borges, who could not immediately be reached for comment. In two days, the fundraiser has gathered more than $2,700 out of its $100,000 goal.

Ellen Baronosky, who donated $50, wrote, “Both Dave & I send our deepest condolences to Eric’s family & also to the whole SWMC!!!! RIP Eric!”