Nova Scotia, Canada (July 27, 2022) - Almost 22 years after Kirk Mersereau and Nancy Christensen were murdered in their Nova Scotia home, the man accused of killing them is facing the prospect of a third trial on two charges of first degree murder. In a decision released Tuesday, the Nova Scotia Court of Appeal overturned the latest conviction of Leslie Douglas Greenwood, an alleged hit man for the Hells Angels motorcycle club. 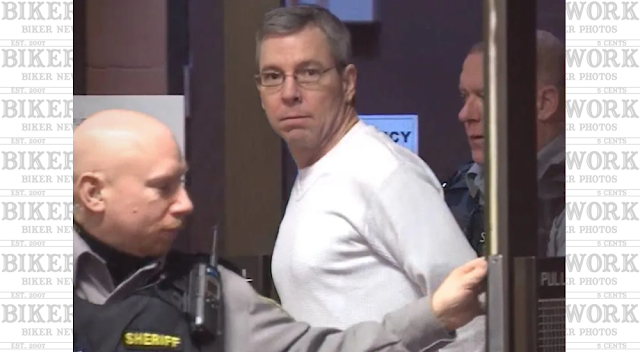 Leslie Greenwood is escorted through the courthouse​ in 2018
Mersereau and Christensen were found dead in their home in Centre Burlington, N.S., on September 9, 2000. They had been shot. Their infant son was lying unscathed in another room. Greenwood was initially tried and convicted in a jury trial in 2012. But that conviction was overturned on appeal.
"Based on the charge to the jury, they may have been left with the impression they could convict Greenwood of first degree murder because he drove Lawrence to the Mersereau home and assisted him in getting access to the house where Lawrence committed the murders without it being proven beyond a reasonable doubt that Greenwood knew that Lawrence had planned and deliberated on the murders," Justice David Farrar wrote for the three-member appeal panel.

A decision on whether to proceed with a third trial is up to the Crown, which is still studying the Court of Appeal decision. Greenwood remains in a federal prison serving a sentence for two murders in Quebec. Kirk Murray and Antonio Anesi were killed in 2010.