Woodenbong, New South Wales, AU  (March 11, 2018) BTN — A war veteran says he has filed formal complaints about the behaviour of police who conducted a mass stop of motorcycle riders on a charity run in northern New South Wales. 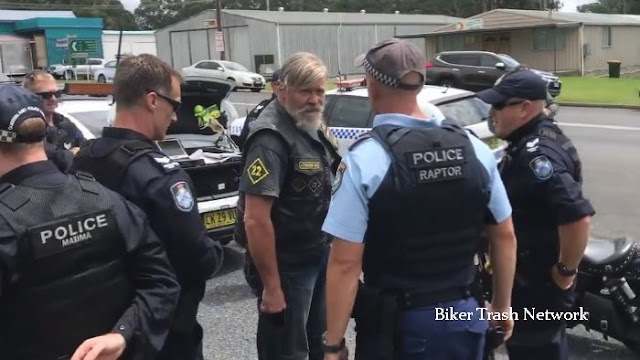 Biker Michael Parr being hassled by the police

About 150 riders were pulled over in Woodenbong at the weekend as part of a cross-border operation targeting outlaw criminal motorcycle clubs. Police allege officers seized a prohibited weapon, and issued 21 defect notices and 50 traffic infringements.

One man was also charged with using offensive language.

One of the riders, 58-year-old Michael Parr, said there was a single member of the Hells Angels Motorcycle Club on the ride, with the rest coming from social clubs.

“We had probably 20 to 30 social clubs on that ride, 97 registered bikes on the ride, all social club members,” he said. “Ages from about 18 through to 60, various physical conditions, males and females.”

Mr Parr has alleged he was shoved by one of the officers involved, and said as a returned serviceman and member of the Veterans Motorcycle Club he expected better treatment. Biker Trash Network

“I leaned forward to him to say you are not going to disrespect me,” he said. “I’ve gone overseas to fight for this country. I’ve got my ribbon bars on my vest and you are showing me no respect. “Then he turns around and shoves me, so how do you think I feel?”

But police have dubbed the joint-agency operation a success, saying it enforced consorting legislation, firearm and traffic laws.

“I would say that we intercepted the people before offences were committed, and that was the whole strategy of the operation,” he said. “To stop them as soon as they come across the border so they do not commit offences in this state. “So from that perspective I would say that’s very successful.”

“This operation wants to send a clear message for those who associate with these people who claim to be that 1 per cent of the population that doesn’t abide by the law,” he said. “We will intercept them if they come across the border into New South Wales. We’ll use the legislation that is available to us to make them unwelcome in our state.”

A Queensland lawyer said he was disgusted by the attitude of police during the operation.

Chris Main, from Alibi Criminal Defence, said he had been phoned by one of the riders involved, then called police at the scene to raise his own concerns.

Mr Main said he questioned the safety of pulling a large group of people over on the side of the road, including a diabetic rider who needed water and to relieve himself.

“I was quite disgusted to hear that the police view, after listening to what I had to say about safety and the comfort of the riders, their view [was]‘I don’t care, we’re going to do what we like’,” he said.

Mr Main said as a civil libertarian, he was drawn to the case.

“Motorcycle enthusiasts are a group of people who like motorcycles. That is not criminal,” he said. “If government or police or whatever group suspects someone of criminality, well then they can build a case, and they can charge them for that criminal act" he said.

“I don’t think it’s suitable or appropriate for Parliament to make laws which allow police to criminalise people, anyone, just on the company that they choose or the hobbies they decide to undertake.”