Christchurch, South Island, NZ (March 12, 2018) BTN — Four members of the Rebels motorcycle club have admitted being members of an organised criminal group that was dealing methamphetamine and cannabis in Christchurch.

Raids on the clubs's headquarters in Vagues Rd, Papanui, in 2016, found firearms, 38 grams of methamphetamine, 300g of cannabis, and $35,000, Crown prosecutor Claire Boshier told the Christchurch District Court as the group pleaded guilty on Tuesday.

"The Rebels motorcycle gang had as one of their objectives to deal in drugs, notably methamphetamine and cannabis, for profit," she said. 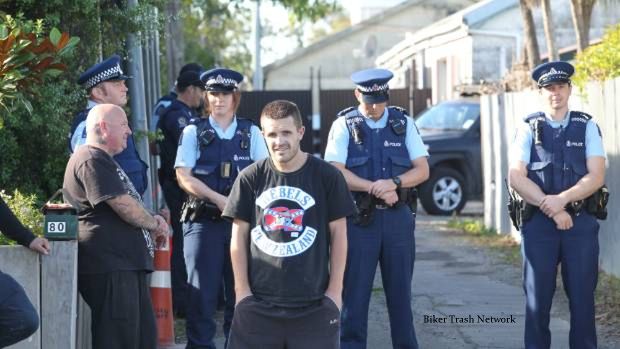 Judge Tom Gilbert set sentencing for June 27 and ordered home detention assessments for three who are on bail: Baden Kenneth Clunie, 25, Apirana Ropata Ngata, 23, and a 45-year-old man who has interim name suppression.

Boshier said the Rebels formed in Brisbane in 1969 and became Australia's largest motorcycle club. Since 2011 they have rapidly expanded throughout the world and established a presence in New Zealand in January 2011. From August 2014 to June 2016, the Rebels Motorcycle Club South City headquarters was in a warehouse in Vagues Rd. It contained a headquarters room, accommodation, and a bar.

The bar area, main room, and accommodation had Rebels paraphernalia such as flags, logos, drawings and insignia on display. There were patched Rebels jackets and vests, Harley Davidson motorcycles and five surveillance cameras with television monitor screens set up in two areas. Boshier said between March and April 2016, the four men were either patched members or prospects of the Rebels Motorcycles South City club.

They were seen wearing Rebels regalia and associating with known members, in Christchurch and other parts of the country. She said Clunie was the "money man" who held the club books and chased members for money owed for club fees.

Firearms were found at the pad when the police searched the premises.

"Gangs such as the Rebels acquire firearms for the purpose of intimidation and protection of the gang. They are readily used by drug dealers for their protection and standover tactics in the sale and supply of methamphetamine and cannabis," Boshier said.

The Crown detailed the firearms – a sawn-off shotgun and ammunition, a cutdown .308 firearm, and air rifles – found at the premises. They also found drugs, a balaclava, and text messages, which they say include "drug talk and drug dealing", although they are sometimes unable to say what type of drug is being supplied.

A fifth person arrested has pleaded not guilty and the case is headed for trial.