Toronto, Ontario, CA (March 9, 2018) BTN — The Department of National Defence and Canadian Armed Forces have issued a nationwide general order banning members of Canada’s military from associating with a variety of groups, including outlaw biker clubs.

The general order was issued in February, almost four years after a military police intelligence report warned that some active and retired troops have an uncomfortably close alliance with outlaw motorcycle clubs.

The February 2018 general order addresses several banned groups. Among other things, it warns members that they must avoid any association that a member of the military “knows, or ought to know, promote racism, sexism, misogyny, violence, xenophobia, homophobia, ableism and discriminatory views with respect to particular religions or faiths.” 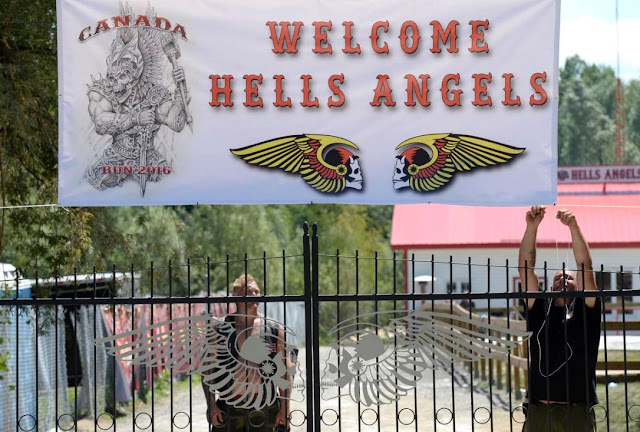 Bikers hanging a banner outside the Hells Angels Nomads compound before their Canada Run on July 22, 2016 in Carlsbad Springs, Ont.

It also bars members from “participation in an activity of, or membership in, a group or organization that a CAF (Canadian Armed Forces) member knows, or ought to know, is connected with criminal activities…”

The 2018 general order follows a July 2014 report obtained by the Star under the Access to Information Act which says that some 155 active and retired military personnel associate with outlaw bikers, “threatening security clearances and reliability, and impacting on CAF operations.”

In the heavily censored report obtained by the Star, 48 of 69 pages are totally blanked out for a variety of security reasons, including concerns that its release might reveal the identity of confidential sources or be related to investigations. The 2014 military intelligence investigation, called “Operation Nighthawk,” notes that some 80 active Canadian Armed Forces members and some 75 retirees belonged to veteran-based motorcycle clubs, called “V-B MC.”

“Many of these V-B MCs are associating with .. Outlaw Motorcycle Gangs (OMG), which are considered criminal organizations,” the report continues. “According to the Personnel Security Screening Office (PSSO), ‘CF members are of interest to OMGs (outlaw motorcycle gangs) in view of their access to weapons, ammunition and explosives, as well as their military training,’” the report says.

The report also notes there is a long and complicated history between outlaw bikers and the military, and that several outlaw biker clubs have military origins that date back to World War II.

“When servicemen returned from the war (WWII) they likely found the transition back to civilian life monotonous or more than they could handle,” the report states. “Feeling disenfranchised and cast out of normal society, they searched for relief and the company of kindred spirits, and perhaps to relive some of the wilder aspects of what they had experienced overseas.” 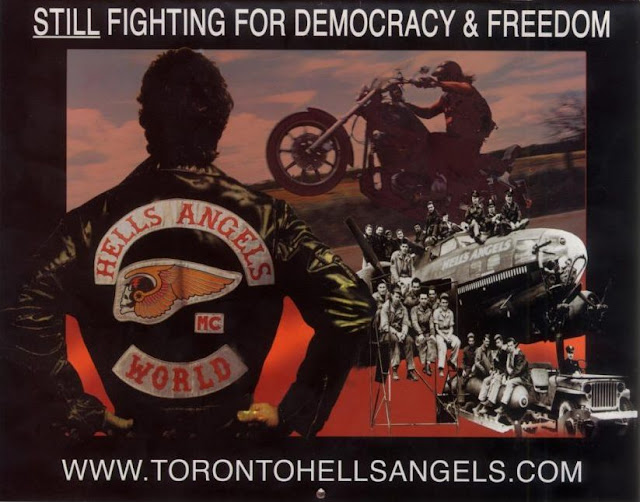 A Hells Angels MC calendar from 2005

The report notes that original members of the Hells Angels included American members of a World War II fighter squadron who painted “Hell’s Angels” on the side of aircraft. (The motorcycle club has since decided to spell its name without an apostrophe).

In Toronto, local Hells Angels referenced their military roots in 2004 when they briefly put up a billboard by the Don Valley Parkway, which included a picture of troops by a military aircraft with “HELLS ANGELS” painted on its side. The caption of the billboard stated “Still fighting for democracy & freedom.)

Since World War II, there have been waves of veterans who have formed motorcycle clubs. Returning servicemen from the Vietnam War formed the Bandidos, Mongols, Sons of Silence, Vagos and Warlocks motorcycle clubs, the report notes.

Operation Nighthawk was launched in 2012 after investigators with the Military Police Criminal Intelligence Program noted that “many veteran-based motorcycle clubs emulated the structure and operation of outlaw motorcycle gangs (OMG),” the report says.

“More worrisome were observations that DND/CAF members of these MCs were rumoured to be associating directly and indirectly with members and associates of known OMGs,” the report says.

The report describes membership in veterans’ motorcycle clubs as “a gateway … to the OMG-lifestyle (outlaw motorcycle gang) and the criminal environment.”

The report expresses uneasiness between members of military-based motorcycle clubs and outlaw bikers, stating “it is of concern that any association to these types of groups provide a possible gateway not only to the OMG lifestyle but the criminal environment as well.”

“There exists the potential for members to be coerced into providing access to CAF/DND (Canadian Armed Forced/ Department of National Defence) assets/ expertise and information which can be used to further the criminal enterprise of the OMG,” the report says.

“Currently there is no policy regarding a CAF member becoming a member or associating with members and/or associates of OMGs,” the report says.

“There is no policy or consistent order regulating or banning the wearing of colours or other club identifiers while on DND property,” the report continues. “There also is no policy regarding the invitation of OMG members onto DND establishments.”