According to the report, David Sanchez is the president of the Deadly Sins Motorcycle Club Carson City Nevada chapter and he is associated with the Vagos Motorcycle Club and was arrested early Friday morning. 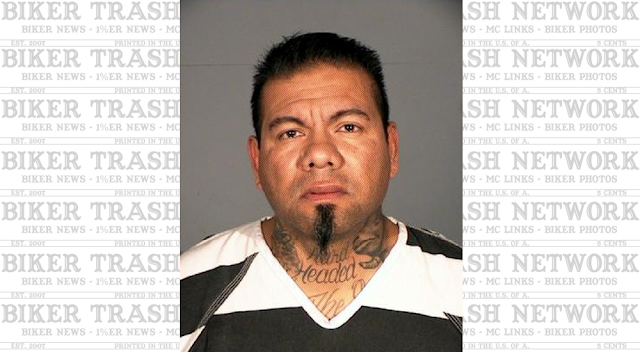 Late Thursday evening, upon arrival, deputies made contact with Sanchez and his child. Deputies took Sanchez into custody for felony domestic battery.

Just before 2 a.m. on Friday, deputies were granted a search warrant of the property and found the following evidence, which was confiscated and booked:

— A Glock 17 9mm pistol was located in a clothing hamper of the master bedroom that Sanchez resides in along with magazines.

The gun was verified through dispatch as stolen out of Carson City. Sanchez is a registered ex-felon and he has prior history of domestic batteries.

— 14.56 grams of Cocaine in a small plastic bag was located in the master bedroom in a desk drawer on the west wall. The Cocaine was Nartec tested and yielded positive results.

— Three separate plastic bags of marijuana weighing approximately 10.2 ounces were located in the master bedroom. Each package had a hand written name on it, indicating it did not come from a legal dispensary.

The door to Sanchez’s room is approximately ten feet from his child’s bedroom, which was unlocked. He was additionally charged with child endangerment.