Pagan's MC: Ruling could toss out evidence in case

Providence, R.I. (July 19, 2019) BTN —In what could be a major blow to a criminal case that targeted two motorcycle clubs, a judge ruled a mass of wiretapped phone conversations should be tossed from trial.

The decision came after defense attorneys successfully argued the wrong judge signed off on an extension of the order to authorize wiretaps in the case.

On Wednesday, Superior Court Judge Netti Vogel ruled in favor of the defense, saying the wiretap extension was improperly signed off on and the evidence at the center of the case for many of the defendants could not be used at trial. 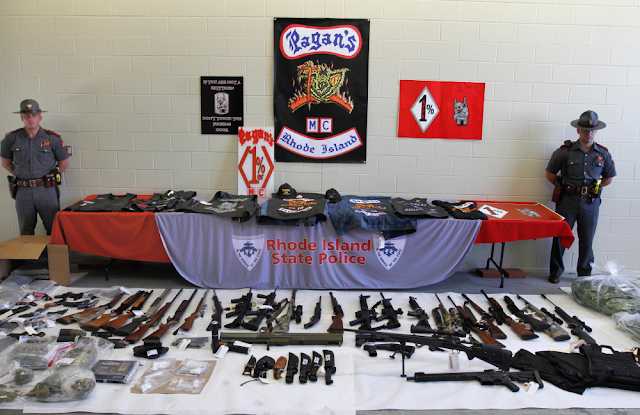 In May, state police, along with federal and local authorities, arrested 50 people in what authorities called the single largest take down in R.I. State Police history.

The raids were the result of a year-long investigation called Operation Patched Out, which focused on two motorcycle clubs – the Pagans and Kryptmen – operating in northwestern Rhode Island.

Among those arrested was Deric “Tuna” McGuire, who police identified as the head of the Pagan's motorcycle club. McGuire was hit with 221 drug-related counts.

It’s unclear how much of the evidence could be affected. Kristy dosReis, a spokesperson for Attorney General Peter Neronha, did not answer that question, but said in an email, “We respect the court’s decision in this case and intend to appeal the decision to the Supreme Court.”

At issue is who signs off on the paperwork that allows investigators to listen in on phone conversations. By law, the presiding justice of the Superior Court is authorized to do so. In this case, Presiding Justice Alice Gibney did OK the order on the original request, but was unavailable when detectives asked for an extension.


Legal experts say the next senior-most judge is then supposed to take the responsibility, but defense attorneys in the biker case say that didn’t happen.

Prosecutors argued Gibney assigned a different judge because there was a conflict of interest with the next jurist in line. But the argument didn’t resonate with Vogel, who issued her decision from the bench.

Veteran defense attorney Jack Cicilline represents McGuire and was one of the attorneys who spotted what they saw as a mistake in evidence gathering and filed the motion. His son, John M. Cicilline, represents Yevgeniy Mazo, of North Providence – known as “the Russian.” John Cicilline said he believes it will be a “significant amount” of the evidence that will have to be tossed from the case.

“This ruling could impact 20-something defendants,” said Cicilline.

Some defendants had already pleaded no contest in the case.

At the time of the arrests, the state police said several rival clubs were competing for turf in Rhode Island, “resulting in increasingly violent confrontations – including three shootings that were never reported to law enforcement.”

Because of the growing tensions, Lt. Col. Joseph Philbin said at the time the decision was made to execute the search and arrest warrants. Police said they obtained the warrants with evidence detailed in a 1,300-page affidavit, including thousands of phone conversations and text messages.

The Raids took place in several communities, including Woonsocket.

It is unclear when the state’s high court will take up the appeal.