The eight men, all from California and ranging in age from 36 to 70, represent the first of three groups totaling 21 defendants in a sweeping case that prosecutors allege involves Vagos and crimes in California, Arizona, Hawaii, Oregon, Utah and Nevada.

The centerpiece of the case is the shooting death of Jeffrey Pettigrew, president of the Hells Angels chapter in San Jose, California, during a brawl at a crowded Reno-area casino that sent gamblers diving under blackjack tables and left bullet fragments in slot machines. 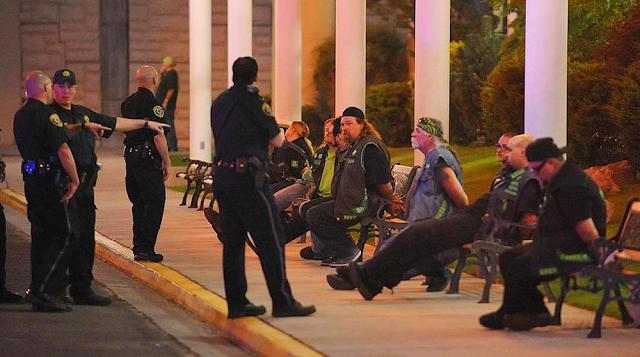 September 23, 2011: Police officers keep an eye on handcuffed men at the east entrance to John Ascuaga's Nugget hotel-casino after a shooting in Sparks, Nevada - The Reno Gazette-Journal

Two Vagos members received non-fatal gunshots in the exchange of gunfire and one was wounded while riding his motorcycle several hours later in what authorities called a retaliatory drive-by shooting.

“The Vagos are always trying to be the big dog. In some areas they are,” said Terry Katz, a retired Maryland State Police lieutenant and gang expert with the International Outlaw Motorcycle Gang Investigators Association.

“Everybody’s heard of the Hells Angels, the Pagan’s, the Bandidos, the Outlaws. But the Vagos are right up there,” Katz said. “To kill Pettigrew in a setting like a casino shows that they just don’t care. It’s not like there are no cameras around.”

Now, nearly eight years later, prosecutors plan to tell a jury the case goes well beyond allegations that the eight defendants plotted to carry out a “green light order” to kill Pettigrew.

“That’s the enterprise. They’re the Vagos,” Daniel Schiess, the assistant U.S. attorney heading the prosecution, told Chief U.S. District Judge Gloria Navarro during a recent pretrial hearing. “The entire conspiracy for the enterprise is admissible against everyone.”


A 12-count indictment filed in 2017 accuses the 21 defendants of being a transnational gang with a hierarchical chain-of-command in which members reach leadership posts by adhering to club rules and committing acts of murder, kidnap, assault, extortion, robbery and witness intimidation as well as drug and weapons trafficking.

Charges date from a January 2005 bar brawl in Los Angeles; include allegations of cocaine and methamphetamine smuggling into the U.S. from Mexico; and point to a September 2011 kidnapping at gunpoint of a Vagos member suspected of violating gang rules. Prosecutors say he was beaten and robbed of his jewelry, guns and motorcycle.

The case relies on hundreds of recorded telephone conversations, reports by confidential informants and accounts by an undercover law enforcement officer who posed as a Vagos member in 2011 and 2012.

One allegation is that club members in Utah were ordered in August 2012 to pay a $100 tax to support lawyers for Ernesto Manuel Gonzalez, who was convicted in state court in Reno of Pettigrew’s death and sentenced to life in prison.

The Nevada Supreme Court overturned Gonzalez’s conviction in December 2015 due to faulty jury instructions at trial. He was awaiting a retrial when the federal racketeering indictment was filed.

He and his co-defendants — Pastor Palafox, Albert Lopez, Albert Perez, James Gillespie, Bradley Campos, Cesar Morales and Diego Garcia — have each pleaded not guilty. Each faces up to life in prison if he’s convicted.