Tampa, Florida, USA (July 31, 2019) BTN – Two men this week will stand trial in the 2017 assassination of a rival motorcycle club leader who authorities said was shot and killed while sitting in his pickup truck in rush hour traffic in Pasco County.

The two defendants, Christopher “Durty” Cosimano, 31, and Michael “Pumpkin” Mencher, 52, are both alleged members of the Hillsborough County chapter of the 69’ers Motorcycle Club. 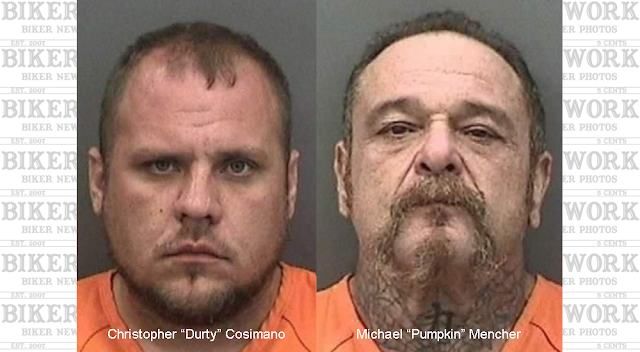 They sat together at the defense table as their murder trial started Tuesday. But their lawyers told jurors that someone else was to blame for the slaying of Paul Anderson, 44, president of the Cross Bayou chapter of the Outlaws Motorcycle Club:

Cosimano’s attorney said someone else — he did not say who — was responsible.

But prosecutors said it was Cosimano who pulled the trigger, and if he missed then Mencher was there to finish the job.

Assistant U.S. Attorney Natalie Adams walked the 16-person jury through the Dec. 21, 2017 assassination and the violent feud that led to it. Cosimano and Mencher rode motorcycles behind Anderson, tracking him. Both carried loaded guns, prosecutors say, and wore masks to hide their faces.

When Anderson took an exit on the Suncoast Parkway and stopped at a red traffic light near State Road 54, Cosimano walked up to the truck’s window, tapped on the glass, then shot the Outlaws leader several times with a Glock 45 semiautomatic pistol, according to prosecutors. “He was dead with his foot on the brake, and a phone in his hand,” said Adams as Cosimano and Mencher looked on, quietly.

The state accused Mencher of being Cosimano’s backup, prepared to kill Anderson if the 69’ers’ president messed up the hit. Anderson, the Outlaw leader, was killed “to claim territory, to demand respect,” Adams said. But Cosimano and Mencher’s attorneys challenged the state’s account of what happened and what motivated the shooting.

Defense attorney Anne Borghetti said her client, Mencher, was told by Cosimano that he wanted to go riding on Dec. 17, 2017. That’s all.

Cosimano never mentioned anything about Anderson, she said, or any plan to execute him. She also tried to minimize Mencher’s ties to the 69’ers, saying the gang treated him poorly, even sometimes leaving him behind at club events. They called Mencher “the village idiot,” she said, and Cosimano’s plan “was to blame Michael Mencher” for the shooting.

Cosimano’s attorney, J. Jervis Wise, said someone else executed Anderson in 2017, but did not name that person. Instead, he described the incident as a “rogue act” that the leader didn’t know about. The attorney said prosecutors are relying on testimony from 69’ers members who will do anything they can to reduce their jail time for involvement in the case.

Both Cosimano and Mencher faces charges of first-degree murder and a slew of related charges, including conspiracy to commit murder in aid of racketeering activity and use of a firearm in a crime of violence causing death. If convicted, each faces up to life in prison. Mencher also faces drug-related charges for his involvement in a cocaine, heroin and methamphetamine ring that prosecutors accuse the 69’ers of running.


Members of the 69’ers, including at least one who has already pleaded guilty to charges related to this case, are expected to testify on behalf of the government, the state told jurors. Three members of the 69’ers — Allan Burt “Big Beefy” Guinto, Erick Richard “Big E” Robinson and Cody James “Little Savage” Wesling — were indicted along with Cosimano and Mencher and accused of taking part in the plot to kill Anderson. They took plea deals earlier this year.

Authorities said the 2017 murder of Anderson was part of an escalating conflict between local chapters of two prominent and motorcycle clubs, the Outlaws and the 69’ers, whose Hillsborough branch called itself the “Killsborough” chapter.

The trial is expected to take three weeks.