Odessa, FL (December 22, 2017) — Three motorcycle club members have been arrested in connection to a homicide that occurred near Suncoast Parkway and State Road 54 in Pasco County on Thursday evening.

At 4:53 on Thursday afternoon near the northbound exit of the Suncoast Expressway on State Road 54, the victim was driving a pickup truck when two suspects on a motorcycle pulled up and got off the motorcycle. One suspect tapped on the window of the pickup truck to get the attention of the victim. The suspect fired several shots and killed the victim in his truck.

The victim has been identified as Paul Anderson, 44, President of the Cross Bayou Chapter of the Outlaws Motorcycle Club in Pasco County, Florida. 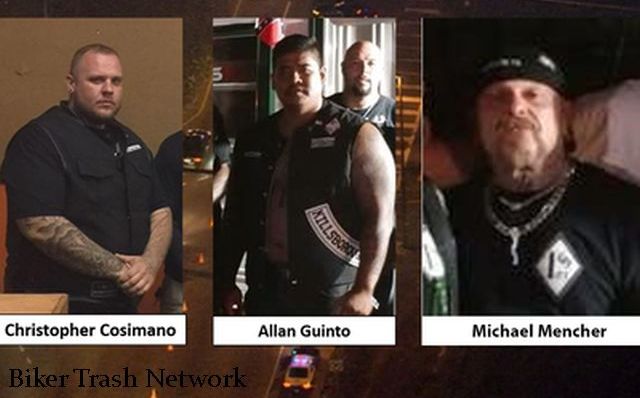 Witnesses in the area submitted tips about the shooting and helped lead officials to three arrests.

The motorcycle club behind the shooting has been identified as the "69 Motorcycle Club" aka the "69ers."

Officials arrested the second biker, Michael Mencher, known to the motorcycle club as "Pumpkin." Mencher was wearing a Nazi helmet at the time of the shooting. Mencher was arrested with the help of Tampa police.

Allan Guinto, known to the motorcycle club as "Big Bee" was arrested in Pinellas County. Sheriff Nocco says Guinto was the driver of the "scout car."

Sheriff Nocco says Christopher Brian Cosimano "Durty" was identified as the shooter by ATF officers, and he is the president of the "69ers."

All three suspects will be charged with first degree pre-meditated murder.

"We suspect that there will be more violence in the Tampa Bay Area because of this incident" Sheriff Nocco said at the news conference on Friday.

On Thursday night, Sheriff Nocco held a news conference to release details about the shooting, in hopes making an arrest in the case.

"This shooting, thank God an innocent person was not killed," said Sheriff Nocco.

A witness heard three loud "pops" and saw the driver of a truck slumped over. Investigators have not released the identity of that driver but tell us he was a documented motorcycle gang member.

"We're concerned about that one bullet that doesn't hit its target and hits the wrong person, hits an innocent person that's just trying to live their lives," said Sheriff Nocco.

Some portions of both roads remained shut down hours after the deadly shooting. Many drivers were forced to take alternative routes or wait in an area that already experiences heavy rush-hour traffic.

"We were about 20 minutes late, there's just an incredible amount of traffic on the highway here and we're just stuck at light after light," said Matt Devine, who was stuck on S.R. 54 trying to get to a family dinner.