New York State: The Kingsmen MC is no more

Buffalo, NY (December 23, 2017) BTN — For more than six decades, the gold knight's helmet with the red plume on top – a frequent sight on local streets and highways – served as a reminder of the Kingsmen Motorcycle Club's dominating presence here. No other biker club enjoyed deeper roots in the community.

But earlier this month, a yearlong legal fight over the Kingsmen name and organization resulted in a court-approved agreement requiring the club's two factions to form new clubs under new names.

In short, the Kingsmen, at least in the eyes of New York State, are no more.

Not surprisingly, in an organization whose motto is "Live Kingsmen, Die Kingsmen," both sides are disappointed in the outcome.

"That is as important, if not more important than, the ownership of any property," said Charles J. Marchese, a lawyer for the previous leadership, of the Kingsmen name and history. 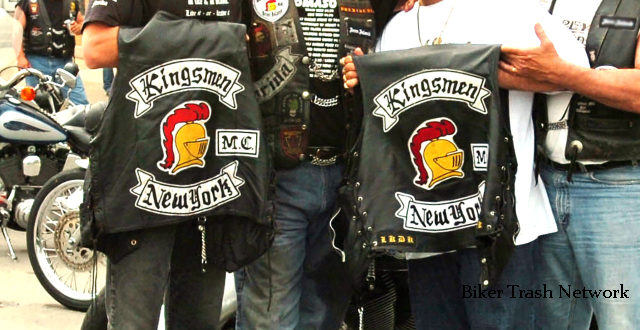 The Kingsmen MC Back Patch — showing the well-known knight's helmet — is not affected by the legal stipulation. (Biker Trash Network)

The agreement, drafted by State Supreme Court Justice Henry J. Nowak, grew out of a dispute between the club's two factions, a dispute first aired in a federal indictment accusing the Kingsmen of operating a criminal organization that relied on drug dealing, gun sales and prostitution to make money.

The indictment also charges David Pirk, then national president of the club, with orchestrating the murder of two Kingsmen in North Tonawanda and suggests the killings were a message to club members opposed to Pirk and the transition to a criminal enterprise.

The agreement, known as a stipulation, is part of a larger resolution still being finalized.

As part of the agreement, the court gave each side in the dispute ownership of one of the Kingsmen's four local clubhouses — one in Lockport, the other in Niagara Falls — and ordered the other two put up for auction next month.

The clubhouses being sold are at 846 E. Eagle St. in Buffalo and 332 Oliver St. in North Tonawanda, the site of the double murder.

"After several months of litigation, my clients and Mr. Marchese's clients thought it best to agree to the stipulation in order to bring closure," said Joseph G. Makowski, a lawyer for the new leadership group.

Makowski said the auction is expected to take place in late January. 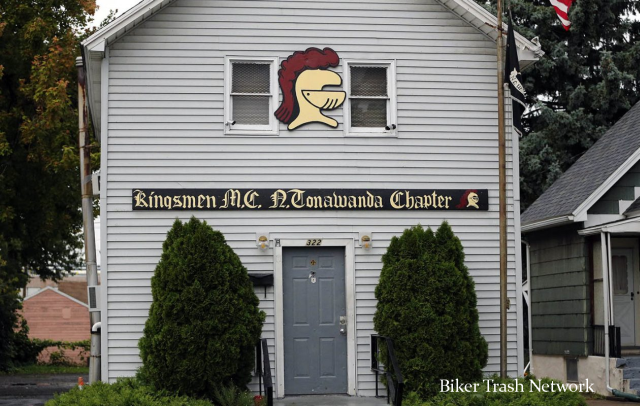 The Kingsmen MC Clubhouse at 332 Oliver St. in North Tonawanda is also being sold at auction
(Biker Trash Network)

The settlement does not affect club chapters in other states but, here, it means the Kingsmen name, a fixture in the biker community since the 1950s, cannot be used in forming a new club.

Under the agreement, the Kingsmen will continue to exist on paper as an organization but without any legally recognized leadership.

When asked if the Kingsmen still exist in Western New York, Marchese said, "I think both sides would say 'yes,' and it is them." Biker Trash Network

Filed in February, the civil suit was an effort by the club's new leadership to assert control over the organization in the wake of Pirk's arrest and detention. The suit, filed by a member who asserts to be the national secretary and others, points to a nationwide election in 2013 that put Pirk in charge as evidence of their legitimate claim to the club's leadership.

The other faction, led by John Spry, one of the founding members of the Kingsmen, opposed the takeover and challenged the legitimacy of Pirk's election.

Unlike most biker feuds, this one ended in four-day trial before Nowak, who was faced with deciding if any of the Kingsmen's national elections followed the law and club's bylaws, and if the people elected during those elections are now the club's legitimate leaders. 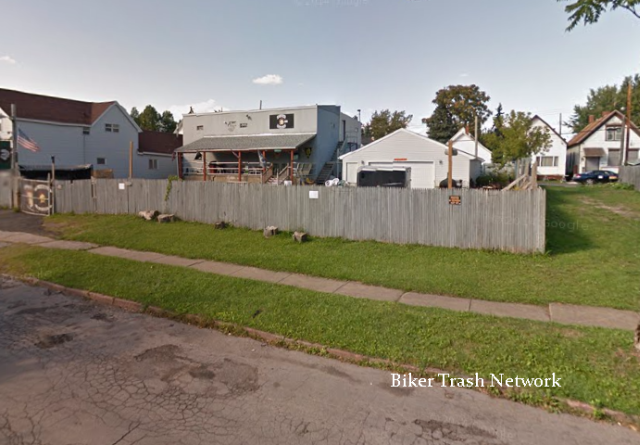 The Kingsmen MC Clubhouse at 846 E. Eagle St. in Buffalo is also being sold at auction
(Biker Trash Network)

"Resolving the issue of which election, if any, complied with the law, was difficult, if not impossible for the court to determine," Marchese acknowledged.

In the end, the four clubhouses, most of them with deep roots in their neighborhoods, became the core of the suit. Nowak's stipulation gives each side one clubhouse and orders the other two put up for sale. An auction date will be announced soon.

"There's still a fair amount of work to be done," Makowski said Saturday.

The agreement also requires the two sides to form new clubs without using the Kingsmen name. Use of the Kingsmen patch — the well-known knight's helmet — is not affected by the stipulation.

Marchese said Spry and the others have already chosen a new name: Knights of Armor. He doesn't know if the other side has chosen a name.

The agreement is the latest chapter in a year-old civil suit over the use of the Kingsmen name in New York State. Marchese said the club was started by Spry and others in the 1950s and was incorporated in 1988 as a nonprofit organization.

Federal prosecutors say a feud within the club erupted when Pirk took over as president and led an effort to convert the Kingsmen to a "one percent" club, biker slang for gangs that engage in criminal activity.

"They prided themselves on not being a one percent club," Marchese said of his clients, the leadership replaced by Pirk and others.

The feud, which pitted members in New York against members in Florida and Tennessee, led to the murders of Daniel "DJ" Szymanski and Paul Maue outside the North Tonawanda clubhouse, prosecutors allege.

Kingsmen Andre Jenkins, the man who killed Maue and Szymanski, was convicted in state court and is serving life without parole.

Pirk, who is charged with orchestrating the murders, will go on trial next month with Jenkins and five others in the federal case.