Canterbury, New Zealand (December 8, 2017) — The Tribesmen Motorcycle Club have made their way to Canterbury. But police are already on their tail, raiding club-connected properties across the region last week.

The Tribesmen have chapters set up in Otara, Rotorua, Murupara in the Bay of Plenty, and in North Canterbury, where police say the motorcycle club has been setting up a “new pad”. The spread of the Tribesmen into Canterbury adds to a number of heavy-hitting motorcycle clubs including the Bandidos, Head Hunters and Rebels, as well as other clubs such as the Mongrel Mob, Black Power, King Cobra and the Neighbourhood Crips. 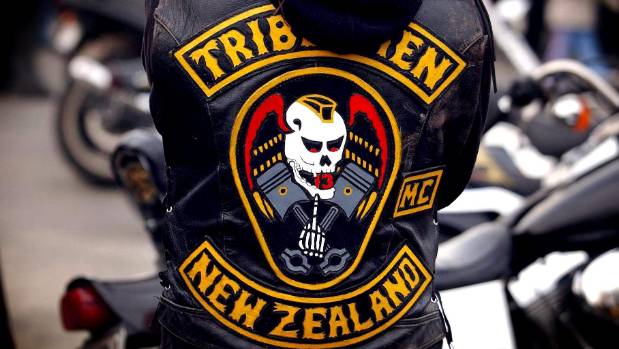 MIGRATION: The Tribesmen Motorcycle Club originates from Otara, South Aukland and have set up chapters in Rotorua, Murupara, Bay of Plenty, and now in North Canterbury.

On Tuesday last week, scores of armed police descended on properties believed to be linked to the Tribesmen MC on Jacksons Rd, Ohoka; Lower Sefton Rd, Sefton; Barbadoes and Cranford Sts; as well as a number of storage units where methamphetamine, firearms and cash were found.

The Tribesmen are known for violent feuds with the Mongrel Mob. In 2010, 16-year-old Jordan Herewini was murdered by mob member Quentin Pukeroa for wearing yellow – which made him appear to be an associate of the Tribesmen – as a result of tension in Murupara between the two gangs.

He was wearing his yellow school PE shirt. The teenager was run down by Pukeroa after being struck to the ground with an axe in the middle of Murupara. Pukeroa was sentenced to 15 years in jail.

So what brings the Tribesmen to Canterbury?

Police say there is a small core group of about eight to 12 Tribesmen MC members in Canterbury but a definitive number couldn’t be supplied because of prospects and affiliates in and out of prison.

Canterbury University sociologist and gang expert, Jarrod Gilbert, said the most likely reason the Tribesmen have come to the mainland is simply migration. Associates or members have moved into the area and continued doing what they were doing back home.

“In the past, this would have been cause for war, but the whole scene is expanding. People move around and keep their affiliations alive,” he said.

Due to many club members getting older, he said the violence was decreasing.

“A lot of the older clubs have fallen away and left a gap and others have moved in,” he said.

However, he said “in a crowded room eventually some gets elbowed”.

“A lot of the older guys are handbrakes for the younger guys. Not like back when they were starting up and there was no real adult supervision. Now there are some older guys around keeping a lid on things,” he said.

Canterbury field crime manager, Detective Inspector Greg Murton, said family connections and work opportunities are reasons why they could have moved into the area.

“While they remain in Canterbury and deal methamphetamine, they will receive close attention from police on an ongoing basis,” he said.

Three were arrested in the recent raids in and around the city, which Detective Inspector Murton described as an extensive two-month investigation into a number of members and associates of the Tribesmen MC.

More than $200,000 in cash, 100g of methamphetamine and a number of sawn-off shotguns and rifles were seized in the raids.

Police also found a large amount of property including motorcycles which have been retained by the asset forfeiture unit.

As a result of the raids, three people were arrested. Andrew Michael Smith, 32, has pleaded not guilty to supplying methamphetamine, two charges of possession of the drug for supply, failing to assist an officer carrying out a search, and driving while suspended.

Lincoln plasterer Mitchell John Sullivan, 18, has been charged with possession of methamphetamine for supply, possession of cannabis, possession of a utensil for using the class A drug and failing to assist a police officer carrying out a search.

Six other Tribesmen MC members and associates have also been arrested over the past few months. They face a variety of charges relating to firearms, drugs, kidnapping, aggravated robbery and receiving stolen property, Detective Inspector Murton said.

“These search warrants and arrests are the culmination of several months’ work targeting suppliers of methamphetamine, to reduce the harm it causes within our community,” he said.

On November 1, police and customs officers intercepted $50 million of methamphetamine in an airfreight consignment sent from Mexico.

It was the largest methamphetamine bust in the South Island. Jonathan Seal, 25, and Michael Harrison-Cooper, 31, were charged with importing a Class A drug and possession of methamphetamine for supply.

Detective Inspector Murton said there was no link that he was aware of between the Tribesmen MC and the Mexican meth import.