London, Canada (December 6, 2017) — The Outlaws MC in London hasn’t disappeared, it just moved to another location. And it’s now supported by a new puppet club called the "Filthy 15", police confirm. With the recent arrests of four members and the closing of a clubhouse only months after opening, it appeared the Outlaws’ resurgence — in a city supposedly dominated by the Hells Angels —was short-lived.

But what sources say is a new and bigger clubhouse has opened up, with about 15 full patch members, and half as many Filthy 15 puppet club members. Meanwhile, what may be early tensions between the Outlaws MC and Hells Angels MC have spilled into the Elgin-Middlesex Detention Centre, the provincial jail in London, sources say.

Outlaws leader Ryan Mark Daigneault, 41, was charged with counselling to commit murder in October and was being held at EMDC. One source at EMDC says there’s a price on Daigneault’s head, and there was an attempted assault on him in the jail.

“In regards to an occurrence at the EMDC, we have been made aware of an alleged incident; however, there was no request or complaint, as is required, to initiate an investigation,” London police Const. Sandasha Bough said.

“While we are aware the Outlaws are still in London, we will not comment on the location of any possible clubhouses. We are also aware of the Outlaws puppet club called the Filthy 15,” Bough said.

Police wouldn’t comment on its estimates of the membership numbers of either club.

The building identified by sources as the new clubhouse is located on Brydges Street, not far from where a clubhouse opened last spring. The previous clubhouse boasted an AOA (American Outlaws Association) sign, and motorcycles with the Outlaws skull and pistons logo were parked outside. 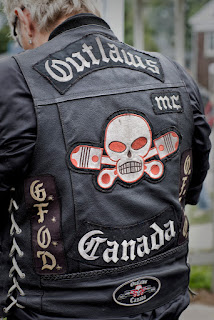 What might be a new clubhouse has no signs, but does have four high-resolution security cameras covering several steel doors. The only glass door is covered so nothing is visible from the outside.

An employee at a business next door said he had no idea what went on behind the walls of his neighbor and didn’t care to. The owner of the building says she was told some kind of repair work was being done out of that space, but was checking further.


An Outlaws supporter said the club has deep roots in London and the new clubhouse — wherever it is — will be well fortified.

“And the Hells Angels do have something to be worried about in London because the Outlaws MC are not going away,” he said.

London police haven’t said who the target was in the charges against Daigneault of counselling to commit murder. Also arrested in the alleged murder plot was a 30-year-old London man, charged with possession of a restricted firearm and another weapons offence.

Earlier in October, the OPP’s biker enforcement unit laid 18 drug and weapons charges against two members of the Outlaws MC's London chapter, resulting from an investigation into cocaine trafficking in the London area. Opening a London chapter in 1977, the Outlaws dominated the city’s criminal biker scene for decades until the Hells Angels MC opened a prospect chapter in 2001.

Several prominent Outlaws — including the chapter president — patched over to their bitter rivals. Then a province wide police bust in 2002, called Project Retire, put dozens of Ontario Outlaws MC members behind bars, though relatively few ended up serving much time.

Some remaining Outlaws MC members tried to start a Bandidos MC chapter, which was destroyed by the massacre of eight Bandidos in 2006 and prison terms for six others. The clubhouse on Egerton Street was demolished in 2009.