Joliet, IL  (December 26, 2017) BTN— The Outlaws Motorcycle Club’s clubhouse in Joliet has been in the spotlight ever since it was searched in connection with the death of a young bartender who went missing in November.

The Outlaws clubhouse in the 1900 block of East Washington Street has attracted controversy in the past two years over the display of a Confederate flag, as well as having signage deemed inappropriate by a local pastor because of how close it was to the Barr Park playground. 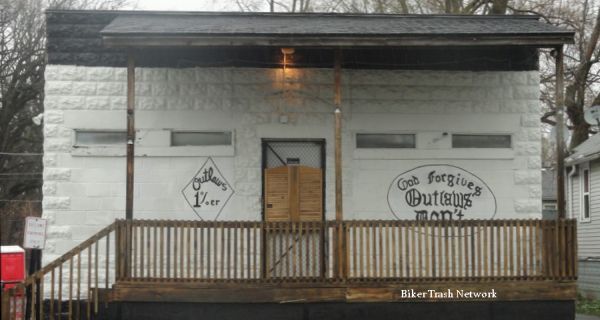 The clubhouse attracted more controversy after Will County sheriff’s deputies searched it Nov. 16 as part of an investigation into the death of 24-year-old Kaitlyn Kearns of Mokena.

One of the club’s former members and Kearns’ boyfriend, Jeremy Boshears, 32, of Coal City, was arrested for allegedly killing her.

The motorcycle club’s motto “God Forgives, Outlaws Don’t” was once prominently displayed on the front entrance of the clubhouse. It has since been scrubbed, along with many other signs, except for the acronym for the American Outlaws Association.Yet still behind the clubhouse is a small stage with the Outlaws’ name and a skull symbol.

“They’ve been totally cooperative throughout this investigation,” Jungles said.

Lake, who runs Saloon 2 with his son and daughter, said he has a few friends who are part of the Outlaws and many of its members either consist of old-timers or newer ones who are in either their mid-20s or 30s. He said their members visit his bar and he’s never had a problem. “They walked my bartenders to their cars and make sure everyone is safe,” Lake said. Biker Trash Network 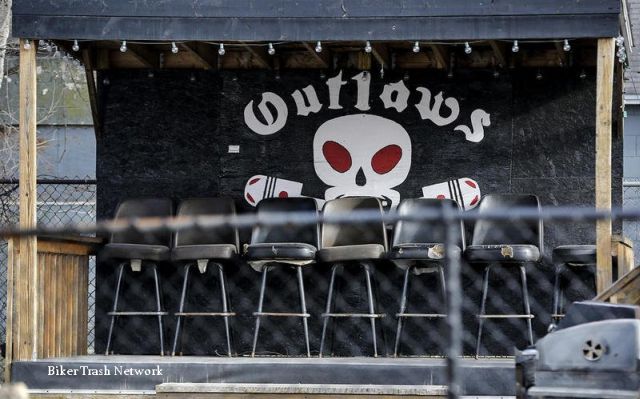 Despite the controversy, Wade Lake, 53, one of the owners of Saloon 2, 1827 E. Washington St., said he believes the Outlaws get a bad rap and he’s never had a problem with their members. Will County Deputy Chief Dan Jungles said the Outlaws members have been open to speaking with deputies.

Leona Tichenor, a pastor at Ingalls Park United Methodist Church, has been critical of the clubhouse over its motorcycle club symbols and motto being displayed near the Barr Park playground.

“That’s a very adult-use (display) next to a children’s playground,” Tichenor said.

In an email, she said she appreciated that the Outlaws have “toned down the exterior signage and are only flying the Stars and Stripes,” referring the U.S. flag that now waves outside the entrance.

Jungles said the county sheriff’s office has not had any calls to the clubhouse itself. Deputies have also not received any blowback when speaking with Outlaws members for the investigation concerning Kearns’ death, he said.

Based on what’s been indicated to deputies, Boshears, who faces a first-degree murder charge, belonged to the Outlaws but his membership was revoked after Kearns had gone missing, Jungles said. He said he assumed it might have something to do with the criminal case.

“They have their own reasons for doing what they do. That’s not something I can really comment on,” Jungles said. Kearns worked at Woody’s bar, 1008 E. Washington St., roughly a mile from the clubhouse, and was with Boshears on the night and early morning she was last seen before she went missing on Nov. 13, police said.

Boshears has pleaded not guilty to first-degree murder. His bond was set at $10 million and he remains in custody at the Will County jail.