Fall River, Massachusetts, USA (September 26, 2020) - Joseph (“JoJo”) Noe walked out of Fall River Superior Court Friday with a GPS bracelet around his ankle after posting $50,000 in bail. Outside, several members of the Outlaws Motorcycle Club, some wearing masks, greeted Noe with hugs as he emerged from the courthouse.

Noe is accused in the shooting death of Oak Bluffs firefighter Eric Voshell, who was a member of the Sidewinders Motorcycle Club, an affiliate of Hells Angels.

Noe, who had been held for a year without bail, was granted bail earlier this week by Judge Renee Dupuis. He had to test the GPS ankle bracelet by walking around the outside of the Fall River Justice Center under the guard of court officers. Members of the Outlaws MC followed them around the building. 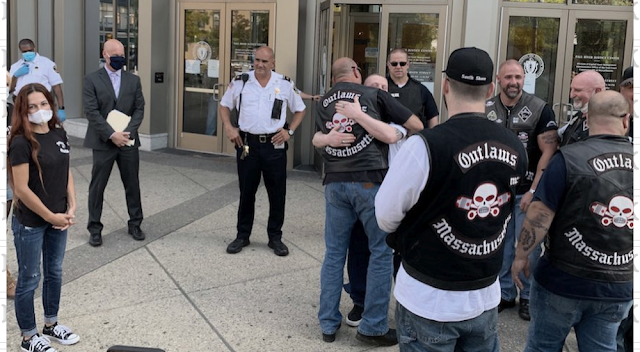 Noe was in court Friday for a series of motions in the case.

Voshell’s wife appeared to be watching the court proceedings via Zoom.

Outside the courthouse, defense attorney Rob Galibois spoke on Noe’s behalf saying he’s grateful for the court’s decision. “We were grateful of course for the court paying careful attention to the evidence over the course of the two-day hearing. I think the best comment that could possibly be made on the state of the evidence comes directly from the court herself. From her decision to release my client on bail, her honor wrote, ‘the facts of this case call into serious question the strength of the commonwealth’s case given the lack of evidence tending to support the commonwealth’s ability to prove that the defendant did not act in proper defense of another.’”

“In other words,” Galibois added, “the evidence shows he did act properly in defense of another.”

Earlier in the week, Dupuis ruled that the prosecution failed to demonstrate premeditation required for a first-degree murder charge during at two-day bail hearing. Video evidence from outside JC’s Cafe in Fall River where the altercation between the rival clubs played out shows a chaotic scene, Dupuis wrote.

Galibois successfully argued that Noe was defending his uncle who was being beaten by members of the Sidewinders who were brandishing cylindrical objects, brass knuckles and knives. The Outlaws were outnumbered 3-1, according to the judge’s description of the videos.

Noe showed some restraint before pulling out his gun that night. “When a woman appeared to be pleading for calm, one of the Sidewinders swung a hammer at her face. Noe took out his firearm and pointed it toward the ground,” Dupuis wrote.

When he noticed his uncle getting beaten, he fired the gun. Voshell was killed and two others were injured.

Galibois said he expects the case to go to trial in September.