Bruce “Monster” Sartwell, 48, entered his plea in US District Court in Boston to a sole count of possession of an unregistered firearm, according to legal filings. He was returned after the arraignment to federal custody, where he’s remained since his October arrest in the case. A federal grand jury indicted Sartwell last month. 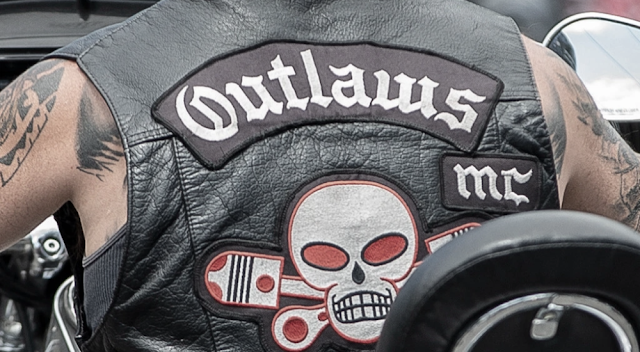 In an October affidavit submitted to the court in Sartwell’s case, Special Agent Michael Belli of the Department of Homeland Security wrote that the Outlaws were locked in a “violent feud” with the rival Hells Angels.

Sartwell, a convicted felon with an arrest record dating back to 1987, is barred from possessing firearms, according to legal filings.

Prosecutors said in October that “a search warrant executed at Sartwell’s residence" resulted in “the recovery of an AR-15 styled ‘ghost gun’ — a firearm without any manufacturing or serial numbers — and firearm manufacturing tools and assembly parts including milling equipment, buffer spring, buffer tube, air-powered water dremel polish and a drill press.”

In addition, prosecutors said, two “firearm silencers concealed in false bottom compartments, a guide for assembly and disassembly of an AR-15 rifle, 20 knives, a black powder handgun, a flare gun, and various ammunition compatible with the AR-15 styled rifle were also found."


In November, Sartwell’s lawyers tried unsuccessfully to free him on bail, writing in court papers that he “has a loving wife and two young children, he is a local business owner in the city of Brockton, and ... his criminal history, such as it is, ended more than ten years ago.”

His lawyers wrote that while the charge he faces is serious, “he is not a ‘serious’ risk of flight or a danger to the community simply because he happens to be the Regional President of the Brockton/E. Bridgewater Chapters of the Outlaws Motorcycle Club (‘MC’) and or goes by the nickname ‘Monster.’ ”

The defense said Sartwell and his wife also runs a tattoo parlor. And, the defense maintained, the feds haven’t tied Sartwell to any recent violence.

A status conference in Sartwell’s case is slated for March 2.