Edmonton, Canada (January 5, 2020) BTN — A self-described “old hippie” arrested at West Edmonton Mall after being asked to remove a Hells Angels support shirt says he is disappointed after losing an appeal to the Alberta Law Enforcement Review Board in the case.

Paul Sussman was taken to the ground by mall security on a Sunday afternoon in 2016. The 74-year-old, who was with his teenaged son, said security guards overreacted when he refused to take off his Hells Angels support hoodie. 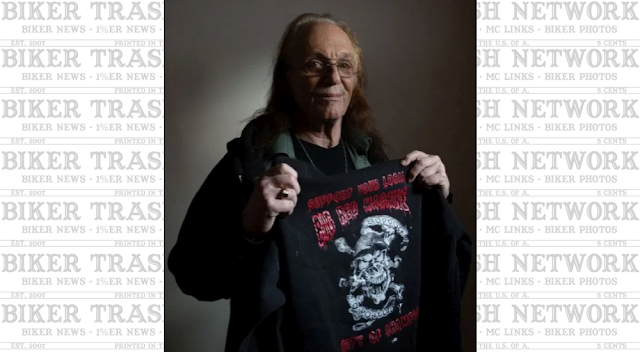 Paul Sussman holding the Hells Angels support hoodie that in 2016 got him in hot water with West Edmonton Mall security.

The story begins Aug. 28, 2016, when Sussman was visiting the mall with his then 15-year-old son. Sussman wore a dark coloured hoodie. On the back in red lettering were the words “Support Your Local Big Red Machine,” emblazoned above a skull and crossbones.

Sussman and his son were eventually approached by two security guards, who asked him to remove the shirt or leave the property, citing the mall’s prohibition on gang paraphernalia.

Sussman refused. In an interview, he said he supports the motorcycle club for protecting him from an assailant in the 1960s. He picked up the shirt at the Hells Angels’ club house in Westridge, where he attends social functions at least a few times a year.


Additional security guards eventually arrived as Sussman exited a pet store. He locked arms with his son, but the guards managed to take him to the ground and handcuff him. Sussman was taken to the mall security office, where he spent several hours in a holding cell. His son was escorted off the property.

Police eventually arrived to deal with the mall’s trespassing complaint against Sussman. Sussman claims he told the police officers he wished to make an assault complaint against the security guards, but that they refused to provide him with a complaint form or investigate his allegations.

Sussman was released later that day without charges.

Sussman claims the mall had no publicly posted dress code in 2016, and that the guards acted arbitrarily (WEM’s dress code, posted on its website, prohibits gang-affiliated clothing).

“They (can) simply tell you to take your clothes off whenever they feel like it, I guess, and assault you if you refuse,” he said in an interview this week. “And the police don’t care.”

The day after the incident, Sussman and his son went to the west division police station and asked for a complaint form. Sussman, who was wearing the same shirt, said the officer at the counter refused to assist him and instead gave him the number for an EPS complaint line. According to Sussman, the complaint line dispatcher told him to contact the officers who attended the scene.

Sussman and his son filed a formal complaint with EPS one year later, alleging the three officers made no effort to investigate his allegations. In the complaint, he alleged the officers did not take him seriously, either because he was wearing a gang support hoodie or because the officers wanted to protect West Edmonton Mall security.

Chief Dale McFee dismissed the complaints in March 2018, saying there was insufficient evidence of misconduct on the part of the officers.